The manager came to mangia.

New York Yankees Manager Joe Girardi was on a mission this past Thurs., Aug. 6th.

Beyond ensuring that the home team remain in first place in the American League East, Girardi had another cause in mind during his visit to the Lasker Pool at 110th Street and Malcolm X Boulevard.

Girardi, joined by Councilmembers Mark Levine and Helen Rosenthal, Department of Education and NYC Parks officials, and anti-hunger advocates, visited the pool to highlight the city’s free summer meals program. Although school is out, free healthy meals are available throughout the summer at hundreds of sites across the city such as Lasker Pool. These also include schools, parks, mobile trucks and libraries.

Girardi credited nutrition as a critical part of the team’s regimen.

“One of the reasons we are playing well this year is because our players are very healthy,” he said. “[And] we only provide healthy meals to our players.”

The manager spoke to hundreds of children clad in swimwear and towels, who listened intently, about the importance of maintaining a healthy diet throughout the year.

“One of the most important choices that you are going to make is what you put in your mouth every day,” he counseled.

Speakers noted that for many families, the summer months can serve as a time of stress and anxiety as it regards food security. As schools let out for vacation, the meals many children rely on during the school day schedule come to an end, and thousands risk being at hunger.

The program aims to ensure that a consistent source of nutrition remains available all year long.

Girardi lauded the collaborative efforts to address the issue.

“No kid in our country should go hungry,” he said.

“To be schooled, you must be fueled,” added Joel Berg, New York City Coalition Against Hunger Director.

The city’s summer meals program is available to all children and teens ages 18 and under, and no registration or ID is required.  The program offers breakfast and lunch through September 4th every weekday, and some locations also offer meals on Saturdays and Sundays.

“We really enjoy providing free, nutritious meals to children all over the city,” said NYC Parks Department First Deputy Commissioner Liam Kanvanagh, adding that free meals are available at 124 locations within city parks, and that over half a million meals have been provided last summer in park facilities throughout the city.

Levine stressed the importance of promoting the summer meals program.

“Not enough people know that in New York City you can get free meals all summer long,” he said. “Healthy food is so essential to young people.”

He said the manager’s participation was particularly meaningful for children and families.

“To have a role model like Girardi giving the message of healthy eating is so impactful,” said Levine. “His presence meant so much.”

A drawing was also held for Yankees game tickets and merchandise, and 30 pairs of Yankee tickets were raffled.

One lucky winner was Mario Acevedo’s daughter, who won tickets to see the Yankees take on Tampa Bay in September.

“I think this initiative is good for the kids. Some kids don’t have food to eat,” said Acevedo, from the Bronx.

His two daughters regularly swim at city pools during the summer months, and he said he was glad for the program.

“They come to the pool and eat for free.” 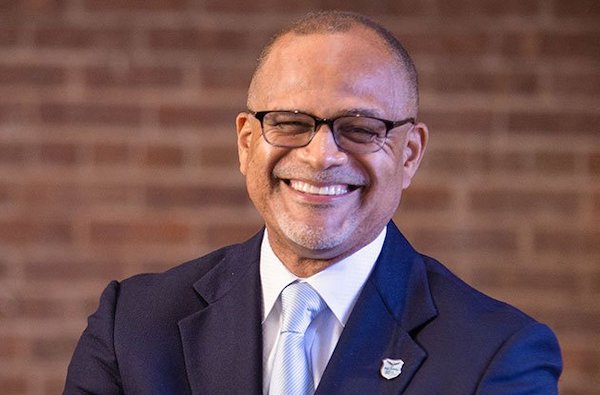