Story and photos by Natasha Soto

The many hands grasping at the large bronze globe at the Hall of Planet Earth knew just where to land.

“Honduras; aquí está Guatemala; por acá está Nicaragua… [Honduras; here is Guatemala; there is Nicaragua],” called out the excited voices of those who had gathered at the American Museum of National History (AMNH) this past Sat., Mar. 12th.

The ridges in the southern hemisphere were a natural touchstone for the visitors; the various countries were ones they had only recently called home.

A group outing to a city museum is most often a prosaic experience, one in which young students are typically shepherded about by an instructor or guide who highlights the unique features of a given exhibit. The visits are heralded by bright yellow buses that have traveled from all corners of the five boroughs.

But Saturday’s group at Central Park West had traversed far more ground than a jaunt from the outer boroughs.

These teenagers, aged 13-18, had made arduous journeys from Central and South America to New York City by themselves, as undocumented and unaccompanied minors. Many escaped violence and war, and traveled without their parents or guardians, in the hopes of connecting with relatives or family friends residing in the United States. Currently, they are living throughout New York. Some have found a home with family members; others are in shelters.

Through a Hispanic Federation initiative entitled Friends of Immigrant Refugee Minors (FIRM), in collaboration with AMNH, over 150 minors were provided with the opportunity to enjoy a classic New York experience: a weekend afternoon prowling around one of the city’s cultural spaces.

“This program is really the first of its kind,” explained Ruth Cohen, AMNH’s Senior Director of Education. “When I was approached about hosting unaccompanied migrants, I said ‘Absolutely, that makes so much sense’.”

Cohen said it was important that the youths come to feel that the city’s museums were welcoming and inspiring spaces, and that they could offer a respite from turmoil and strain.

“This museum represents the universal,” she observed. “I want the children to understand how museums host the world’s resources, their resources. [We also want] to inspire them and create a bridge to their future.”

“I want these kids to enjoy what this world-class city has to offer, as well as to feel the joy and wonder of being a child,” he noted.

Beyond the exhibits, the youths were also introduced to Latin American scientists who work with AMNH.

“Today, we get to relax and focus on life’s joys, instead of just the sadness,” said HF volunteer Lucia.

Kevin, a 17-year-old from Guatemala, was one of the youths who wandered through the exhibits with a wide smile.

He currently lives in the Bronx with his uncle, after a grueling journey across the border to escape the daily violence he’d endured at school.

After crossing the Río Bravo, young Kevin was arrested for five days, and then sent to Florida, before finally being united with his uncle.

But his suffering was not over.

“When I finally made it to New York and connected with my uncle, that’s actually when the stress intensified,” admitted Kevin. “I got these horrible headaches all of the time, because I knew that I could be deported at any moment.”

He and his uncle approached many lawyers for assistance, but found no one willing to take on his case. He said they all told him that there was nothing they could do.

But they eventually came across the non-profit organization La Puerta Abierta/The Open Door, which works to provide resources and community-based programs to families living in disadvantaged and circumstances.

“[They have] helped me with my case,” beamed Kevin.

Attorney Allison Wilkinson, who has worked with many of the minors and their families at La Puerta Abierta/The Open Door, walked through the halls with her charges. She observed as they laughed and spoke animatedly, their voices echoing in the cavernous hall.

She said she enjoyed seeing them focus on ideas not directly related to their cases for a little while – though she admitted it was never far from her own thoughts.

She shared that two of her two youth clients had just received good news.

“We are very excited; [their] green cards have been approved,” she smiled. “[They will receive] it from my office on Monday.”

As the youths gaped at the life-sized 94-foot-long, 21,000-pound fiberglass model of a female blue whale in the Hall of Ocean Life, Calderón said the city’s wonders were reason for celebration – for all.

“[This museum] still wows me, even as an adult,” he observed. “We have to share our American institutions. We have to do better. We can’t just turn our backs on these children, who are actually refugees fleeing despair, violence, and poverty. It is a moral obligation to do something. We simply do not have the luxury of walking away.”

For more information on Hispanic Federation programs such as FIRM, please visit www.hispanicfederation.org or call (866) HF-AYUDA (866.432.9832). 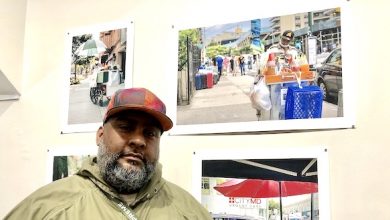