Publisher, The Manhattan Times and The Bronx Free Press

During the first 18 years of my life, every year, my family would get together at the home of Mama Justa, my maternal grandmother.

With farewell songs “a lo tipico,” we would send the old year packing and eagerly await the New Year.

At 12 midnight on the dot, after kisses, hugs and much commotion, we would throw water out onto the street to get rid of any bad spirits. That was always my favorite part.

And sometimes, as if I were in a movie, and I was the only viewer, I would sit in a corner of the party room and look on in pride at the bedlam of a family that loved, cared for, fought and made peace with each other – a family that shared.

It has rained a lot since those days in Río Piedras, Puerto Rico.

Many members of that generation that used to gather together with Mama Justa’s house are no longer with us. It is during this time of year that I remember them the most.

The best way to honor them is by maintaining that tradition. It begins a few days before the end of the year, and includes taking inventory of what has happened. It is a time to learn from the mistakes, cheer the triumphs, make new resolutions and plan the New Year’s party.

2014 was marvelous. Without a doubt, the culminating moment was the birth of Sebastian, our newest Miranda. The son of my son Lin-Manuel and my daughter-in-law Vanessa will grow up with his cousins. My adored grandsons Luisito, Alejandro and Dylan Javier will be able to teach him the things that kids teach each other – how to ever-so-slightly manipulate the truth, how to keep secrets from their parents, how to understand the world from the perspective of a little one. They will be defended, and sometimes counseled, by my cherished nephew Miguel, who will soon be 14 years old.

On December 31st, Sebastian will also join in our traditions at New Year’s Eve.

And though nothing compares to his arrival, celebrating my 60th birthday was also a very emotional moment this year. My birthday party captured the fruits of many labors and many years, personally, community-wise and politically.

First, my entire family was there, including my loved ones from Puerto Rico. That was huge. It is incredible that while I left the island 42 years ago, my relationship with my siblings remains as if we were neighbors. My friends who are elected officials – Melissa, Guillermo, Adriano, Julissa, José and Ydanis – were also present. Having friends with whom I have grown old with, as well as those who keep me young, at the party was phenomenal. There were no speeches (other than mine) and everyone had a great time and danced to the sound of Flaco Navaja. This “salsero”, whom we came across during an event in El Barrio, is a singer from the school of Rubén Blades and Gilberto Santa Rosa.

His songs are stories.

And dancing is always my priority.

I shared the thrilling moments of winning of an Emmy Award with my son Lin-Manuel, who was awarded for composing the opening number of the 2013 Tony Awards ceremony. I will always remember squeezing his hand with expectation and excitement, as if he were a little boy again, in the moment before his name was announced as the winner.

And with my treasured wife, Luz, I went on a trip to London for the opening of In the Heights across the pond. Proud as peacocks, Luz and I were treated like royalty by the cast and crew of the production.

It is with my daughter Luz that I share the exciting and occasionally monotonous task of maintaining our company, The MirRam Group. Cita, as we lovingly call her, is my right hand of our daily operations. I am proud to be able to separate the roles being her Dad and her boss. She is a tremendous daughter, mother, sister and partner.

And in 2014, my Miguel, has made me proud all over again by making honor roll at his new school, while his mother, my niece Landa, is working hard to finish her degree and still making certain that every copy of The Manhattan Times and The Bronx Free Press is distributed to every corner of our boroughs.

My son Lin-Manuel’s new play, Hamilton, opens at The Public Theatre.  Though I am a little biased, I know it to be a magnificent work of art that will place him as one of the great composers of his generation.

And his triumph will be the collective triumph of the Miranda clan.

On that opening night, my luminous wife and I will look at each other, as we have done millions of times over almost four decades of marriage, and without words, we will tell the other, “We are doing a good job, honey.”

What to Do
Qué hacer 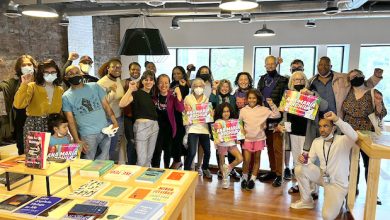