Uptown superhero, Lin-Manuel Miranda, has done it again. In record time, he gathered some of the biggest names in Latin music to put together the infectious “Almost Like Praying.” Artists such as J Lo, Marc Anthony, Ruben Blades, Juan Luis Guerra, Gloria Estefan and many more did their thing on this impressive feat of solidarity. The tune was written and recorded to benefit hurricane relief efforts in Puerto Rico with proceeds being donated to The Hispanic Federation’s Unidos Disaster Relief Fund. Please understand this, Puerto Rico is still not in the clear. The back-to-back hurricanes battered an island that had already been devastated by financial storms that only benefited the wealthy on the island and in America. Trump’s disgusting, insulting and patronizing behavior has only added insult to injury. With that said, we must continue to support the people of Puerto Rico in their hour of need.

Annie Correal of the NY Times penned an outstanding piece on one of the last of the great social clubs of Washington Heights, Centro Cultural Deportivo Dominicano de Nueva York. The establishment has been around since 1966 and has served as a home away from home for countless Dominicans. As the neighborhood changes these crucial community-affirming spaces are becoming a thing of the past. Shout out to Victor J. Blue for the super cool photos and video that are featured in the article.

In September of last year, we published “The Wall,” a short story by local novelist A.J. Sidransky on what America would like in 2022 after an election victory by Donald Trump. At the time, the piece was chilling but now after several months of the Trump Tyranny it is downright disturbing.

If you want to try one of the best slices in all of NYC, then look no further than Pizza Palace on Dyckman. In 2012, Pizza Palace has the distinction of being rated among the top five slices out of hundreds of Pizza places in Manhattan by The Slice Harvester. The Hungry Dominican gives us his take on this Uptown institution.

In the latest episode of the Latinos Out Loud podcast, the crew chops it up about the Room 28 Comedy vs. Section 8 Is Ballin’ softball tournament, dreaming while awake and old school screen names. The special guest this week is filmmaker Ramon Pesante. 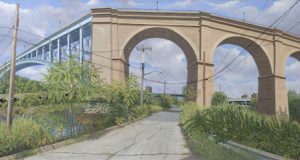 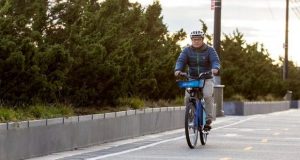