Michael Díaz, also known as his alter ego Juan Bago, is on tour.

And he is relying on quarter waters, the popular, candy-colored juice drinks, to get him through.

Díaz is on a bodega tour of the United States.

So far, he has been to Miami and Houston filming Bodega Chat, a web series hosted by Brisk—the purveyors of Brisk Iced Tea, which is a mainstay in bodegas across New York City.

In his travels, he meets and interviews local artists—and gets them to open up about their tried and trusted local bodegas.

In far-flung reaches of the country, Díaz is an ambassador of Washington Heights, while he simultaneously learns more about the various iterations of the bodega that exist throughout the country.

“It’s an eye-opener,” he said. “It’s a two-way street. I’m bringing awareness and I’m getting awareness.”

Some locales, like Chicago, have their venerable corner stores, for example, while Houstonians go to the fresquería for their essentials.

Aside from the fresquerías and perpetually warm weather, Houston has proven different in other noticeable ways.

“As soon as I got to the airport, I saw like, five guys with cowboy hats and cowboy boots. I [thought], ‘Damn, I only see one cowboy hat a year in New York.’”

A common thread throughout his travels and chats has been an appreciation on the part of his interviewees for the mom-and-pop store that has been there through thick and thin.

“It’s refreshing. When you ask them about their community, the bodega really brings them back.”

Díaz goes by his alter ego, Juan Bago, during interviews, and asks questions about the role of the bodega in their lives.

He asks three key questions of each one: their biggest tab at their local bodega; the strangest thing sold there; and details on their most recent visit.

Díaz has interviewed musician Sensato, who is Bronx-raised, and Bodega Bamz, an East Harlem rapper. He also doubles up with Oscar Martinez, better known to some as O, to chat with artists at Brisk Bodega Launches in each city he visits.

“Mike was selected to be the host of the Brisk Bodega Chat series because he’s incredibly likable,” explained Eric Whitehouse, Brisk’s Marketing Director. “His Juan Bago personality has an organic comedic flare that reflects the multi-cultural values and influences that resonate with our consumer. He’s a great partner with a true passion for creativity, collaboration and community, which are the same pillars of the Brisk Bodega program.”

While in Texas, Díaz has interviewed Milkman, a rapper of Mexican origin; Fat Tony, a rapper of Nigerian descent; and a Mexican-American muralist, Santos Guerrero.

After his visit to Houston, Díaz will be back in the Heights, before being whisked away again to Los Angeles.

He has also been getting an education on the larger food scene in each city.

“Miami had the most impeccable cafecito ever,” he lauded. “And it’s like people don’t drink coffee in Houston.”

But what Houston lacks in coffee, it makes up for in tacos.

Díaz took a quick liking to the offerings at one particular locale.

“The tacos were so good, I joked I would have their spare tire taco.”

He had the tongue taco instead. The oxtail taco also got the Bago seal of approval.

Díaz’s own bodega is on the corner of 177th Street and Broadway.

He is such a frequent visitor that the bodeguero already knows what he’s going to buy when he walks in the door.

He is also aware if there is a change in Díaz’s personal habits.

Díaz started juicing recently, and so is avoiding sugar and carbohydrates.

His morning bagel has been replaced by coconut water, eliciting concern from the bodeguero.

“This guy really monitors my eating habits,” laughed Díaz. He said that while he usually doesn’t spend more than $25 each time he visits the bodega, he has been at the bodega at all hours.

One kind of merchandise Díaz has seen at bodegas that has confounded him are clothes.

He re-enacts an imaginary thought process of the patron who shops there: “You know what? I’m not going to go to Gap to get clothes; I’m going to go to my bodega.”

Given the multiple needs met by bodegas, it’d be hard to imagine that they’d be on the decline in New York City.

But recently, José Fernández, the president of the Bodega Federation USA, told the Wall Street Journal that, in the past year alone, bodegas in New York have declined by 20 percent.

Díaz hopes that the Bodega Chat series will renew awareness to the iconic – and useful – corner store.

“We need the bodega,” he urged. “We have to fight for the bodega.”

Aside from that mandate, Díaz only has one other as regards the chat series:

“Watch it. Enjoy it. Really listen carefully to the artists’ answers. All artists start from somewhere.”

For more on the series, please visit www.briskbodega.com/post/52311948387/bodega-chat-teaser. 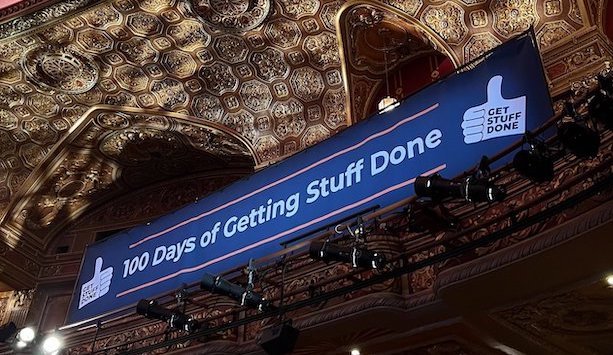