Books – and roots – on wheels

Not with smart phones or on social networks, but to their native roots.

“We are all native to the Earth,” he said.

Whether you’re Native American, have Taíno blood, or are a descendent of Germanic tribes, we all have one thing in common, says Ramos.

“When we connect to Earth, it’s our unifying force.”

For the past four years, Ramos has also sought to try to get people connected to their personal histories, and to each other, with his Mobile Indigenous Library, which he transports from borough to borough in a shopping cart.

He keeps the books, most of them donated, in Inwood’s Manhattan Mini Storage, but would like to get a permanent spot one day so his collection can grow.

In the meantime, he takes them anywhere he can, to street corners in Inwood and East Harlem, as well as to Brooklyn and Queens.

People stop by and browse the collection, which, on any given day, consists of as many books as he can fit in his shopping cart. There are many books on Native American tribes, on the shamanistic rituals of the Celts, and on healing medicinal herbs.

“A lot of people know they have Native American ancestry,” he explained. “Or they’re exploring or curious.”

Overseeing the interactions is a statue Ramos keeps on the table; it is, he says, representative of the Taíno people.

Ramos noted that people have had spiritual experiences while visiting his library. He recalled one teenager in East Harlem who approached the table on a hot summer day. Ramos described him as shirtless, shifty and troubled-looking.

“I thought he was going to ask me for money,” he laughed.

Instead, the youth started talking about his grandmother, who honored Native Caribbean spirits and kept statuettes in her apartment.

The young man asked to touch Ramos’s statue, and said a prayer for his grandmother. “He felt at peace at the table. It brought him back and zoned him in,” recalled Ramos.

“That was my first education,” he said of his childhood experiences.

Interestingly, it was when Ramos was studying for the priesthood many years later that he became drawn again to his Taíno roots.

He recalls the year: 1992, the 500th anniversary of the arrival of Christopher Columbus to Hispaniola.

“That year opened doors for me.”

It was in 1992 that Ramos, as a friar, went to a Crow Nation reservation in Montana, where he participated in a sweat lodge ceremony that incorporated the use of tobacco. “I was totally overwhelmed. It brought me back to my childhood.”

When Ramos went back to Wisconsin, where he was studying for the priesthood, he felt compelled to build his own sweat lodge. He wanted to let the memory of his experience in Montana guide him, but felt badly afterwards when one of his fellow friars told him that building a sweat lodge isn’t the kind of thing done off-the-cuff by novices.

“It has to be something that is passed down. I didn’t follow protocol.”

His guilt compelled him to go all the way back to Montana to apologize to the Crow Nation. But he wasn’t offered a rebuke by the tribe’s spiritual leader for not knowing the protocol.

“He told me, ‘Well, tonight I’m going to teach you the right way.”

“I started thinking about the sweat lodge while I was in Mass. I needed to go back (to the old ways).”

The idea for the mobile Indigenous Library came to Ramos as a result of his work in home hospice care, as he helped patients pass on in the comfort of their own homes.

It is an effort he feels is critical to keeping a collective history alive.

“I always try to collect stories on their family. A lot of them can’t pass it down. Someone will die and they take all of their stories with them,” he said, referencing those that are often without family or friends nearby.

In the homes of his patients, many of whom are Latino, religious and spiritual paraphernalia are brought to the forefront.

“Let me tell you something, there’s always a certain person (in each family) who will honor the Native American ways with a statue. When I go to houses and see a statue, I’m not leaving until I get some information,” said Ramos with a laugh. “It’s a thrill when people start sharing their stories.”

Ramos says that he has found that when people reconnect to their roots at the library, they also reconnect with nature.

“People tell me how they can’t get any fresh fruit in the city, that back home they could reach out their window and get a mango,” he said. “People want to get connected; there is a yearning.”

He sees such connections at the Inwood farmers’ market, where he often sets up the Library on Saturdays.

Ramos recently received a grant from the Citizen’s Committee for New York City to add children’s books and more books on indigenous women to the Library, He eventually wants to obtain a space that will serve as a library and a cultural center, and has started an Indiegogo campaign to that effect.

“This is what people want.”

The next appearance of the Indigenous Library will be at Inwood Hill Park on Thurs., Aug. 8th at 6:30 p.m. The event will mark the arrival of 200 indigenous rowers and friends at the park after a 13-day journey paddling along the Hudson River from Albany to bring light to the 400-year-old Two Row Wampum Treaty between the Haudenosaunee (Iroquois) Nations and Dutch settlers. The treaty was not honored, said Ramos, because of the environmental degradation that has followed the colonization of Manhattan by the Europeans. The Treaty was first forged at the site of Shorakapok Rock in Inwood Hill Park. The rowers’ arrival will be celebrated with a poetry and spoken word event.

Gods among us
Dioses entre nosotros

At your service
A su servicio 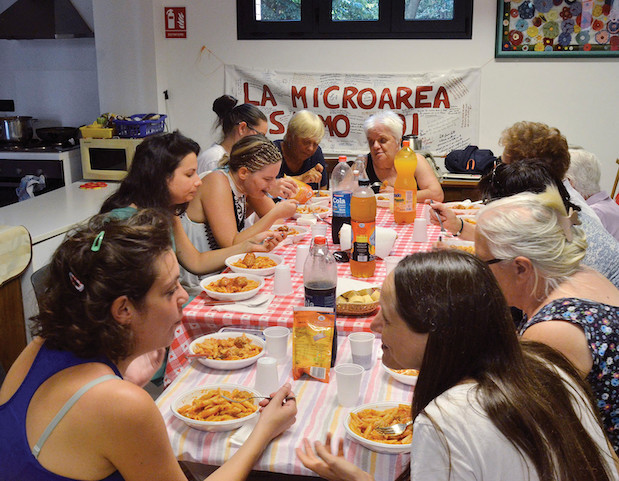 MOM: Stories about the one without whom you wouldn’t be

“The older you get, the more it feels like people forget about you”
“Cuanto más envejece, más sientes se olvidan de ti”