Sharing in the shot

For the past four years, he’s captured people in starkly beautiful black and white portraits during the Juan Pablo Duarte Festival and Carnaval on St. Nicholas Avenue.

People hold up signs containing messages to their future selves. Fitelson takes the photos and puts them away for a year.

“Message Delayed” is a 10-year project, with each year serving as a mini time capsule. For Fitelson, Executive Director of the United Palace of Cultural Arts and an independent photographer, creating the photos is about building community.

While some people have their photos taken as a lark, it’s a meaningful marker of time to others. “When you ask people, what’s on your mind, the responses you get are incredible,” he said.

This year, one man wrote on his sign: “8 months drug free.”

Fitelson told him to come back next year and write: 20 months drug free.

“This is where the community comes in,” he said. “If that’s a little incentive to help him along the way, fantastic.”

Fitelson keeps the photos for a year before displaying them as a kind of antidote to the ephemeral nature of texts, tweets, pastes and posts.

People send out dozens of missives, sometimes daily. “You send it out into the ether and it doesn’t get read and it disappears,” he said. “It doesn’t really matter and you forget about it. Communication has become so forgettable.”

People have returned in succeeding years to have their photos taken again.

“They’ll do a message that plays off their earlier message and take it in a new direction,” he said.

While the actual location of the annual festival is colorful and vibrant, he strips it all away with crisp black and white portraits against a newspaper background, circumventing all of the colors, and any distractions out of the shot.

“I wanted it to be about the people,” he said. “It’s one of the reasons I like having the newspaper as the backdrop. It’s very black and white and it turns into a nice gray with the text out of focus.”

The results are rewarding.  Last year, a mother and son had their photo taken together. They both held signs with the words “I love” next to an arrow pointing to each other.

They came back this year and marveled that the photo and told Fitelson that it had been a very hard year for them.

“This took them back to a carefree, fun day that they had a year ago. It meant a lot to them,” he said. “And they got photographed again.”

It is part of the month long Uptown Arts Stroll. 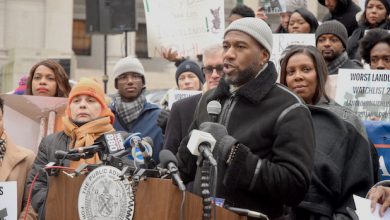