Members of the Council’s Manhattan Delegation, including Councilmembers Robert Jackson, Melissa Mark-Viverito, Gale Brewer and Inez Dickens were on hand to present the ceremonial check for capital funding at El Museo that morning.

The funds are intended for El Museo’s Gallery Environmental Stabilization Project, which will impact its permanent and temporary exhibition.

“It’s amazing to have the Councilmembers be so supporting of the work that we do,” said Eileen Reyes-Arias, the museum’s Government and Community Relations Manager
“We have strong advocates in the City Council,” added Gonzalo Casals, the museum’s Deputy Director. “They always find ways to support us.”

The funds will be used to help create a more climate-controlled environment in the museum, which will enhance its ability to borrow pieces from other museums, explained Casals.

The museum, located on 104th Street and Fifth Avenue, features an extensive collection of around 8,500 pieces composed of pre-Columbian and traditional artifacts with a large permanent Taíno exhibit, as well as 20th century arts and crafts, Mexican masks, textiles from Chile and traditional art from Puerto Rico.

educational programs throughout the year.

Some of the institutions Casals said he hopes El Museo will be able to borrow from are the Museum of Fine Arts in Houston, Texas and the Museum of Latin American Art in Buenos Aires, Argentina.

As she explained it on Wednesday, El Museo holds a special place for Councilmember Mark-Viverito, due to its grassroots history.

The institution was founded by in the 1970’s by artists, educators, parents and activists concerned about the lack of cultural diversity in the city’s educational programs.

It was originally located in a neighborhood firehouse.

“The genesis and origin speaks so strongly about the importance culture plays. To see its evolution is really wonderful,” she said.

Since its inception, El Museo has gained national renown and conducts education partnerships and programs throughout the city.

One person who regrets not having more time to visit with the wonders of El Museo is Councilmember Robert Jackson, but on Wednesday, he had selected some favorites.

One, El Pique, by Kenneth Rivera, was a depiction of Dominican life in New York City.

The piece revealed scenes familiar to Jackson, who is a long-time resident of northern Manhattan and a representative in the City Council since 2002.

“I need to find time to enjoy the beauty of our museums,” said Councilmember Jackson, chuckling.  “Hopefully, I’ll live a long life and get to join the culture after I retire.”

Why I Am Running
Porque me estoy postulando 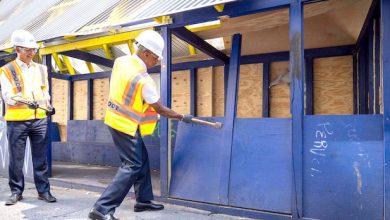 A vigil to save Alianza
Una vigilia para salvar a Alianza