Almost a year to the day after Word Up closed, the community bookstore will celebrate a grand re-opening in high style with a party.

And all are invited.

The new store at 165th Street and Amsterdam Avenue is prettier, has nicer floors and more window space, perfect for displaying books and creating an inviting space for lovers of literature.

On the store’s Facebook page, co-founder Veronica Liu said that while the awning still bears the name of the previous occupant—Sandy Salon Spa, Inc.—that shouldn’t stop patrons from coming in and browsing.

The new location is several blocks south of their original spot, a former drug store on Broadway and 176th Street.

The old store had inconsistent and often non-existent air conditioning. The ceiling had a gaping hole that leaked. The restroom was unreliable.

They jammed inside for presentations by The People’s Theatre Project. When musicians performed, crowds overflowed on to the sidewalk.

Even when no events were scheduled, patrons sat on the large sofa in the back of the store and read, talked and forged neighborhood bonds.

Word Up was originally only supposed to be open for a few weeks. But its popularity quickly grew and the lease got extended.

But just after they celebrated a one-year anniversary with several nights of festivities including a special appearance by Pulitzer-Prize winning author Junot Díaz, the building’s new owners canceled the lease.

Liu, Jiménez and the army of volunteers who work there vowed the store would eventually re-open.

They packed up inventory and hauled it across the street to the United Palace of Cultural Arts, who graciously stored the books in their basement.

Even though most of its inventory was in hibernation, Word Up held pop-up events throughout the year, often in association with other uptown cultural partners including the United Palace, Fort Tryon Jewish Center, El Museo del Barrio and Northern Manhattan Arts Alliance (NoMAA).

“Being without a permanent space for almost a year in fact helped further collaborations with a lot of groups we had been wanting to work with, or had already worked with,” said Liu. “That’s not going to stop. And with the big space issue settled, we can now work on collaborating with even more people.”

After a successful IndieGoGo campaign that raised more than $60,000 and a lot of negotiating, Liu and crew announced in June they would reopen at 2113 Amsterdam Avenue at 165th Street.

The new landlord, Community League of the Heights (CLOTH), is a non-profit organization that focuses on housing and neighborhood improvement.

When the deal was originally signed, Ingrid Gómez-Faria, Director of Housing Development, stated that having Word Up as a tenant was “consistent with the mission” and the store’s focus on education “goes hand in hand with housing.”

Bookshelves obtained from Materials for the Arts are being stocked.

New furniture is being trucked in.

The store is holding an open invitation for new volunteers this week—all in preparation for the grand opening on Fri., Jul. 26th at 6 p.m.

For more information on Word Up, please visit www.wordupbooks.wordpress.com. 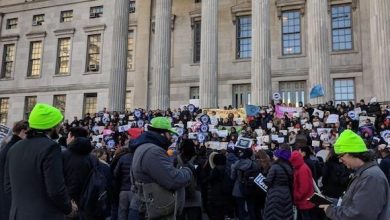