After contentious battles with the NYPD and Community Board 12, owner José Morales has decided to close up shop. On Instagram, he thanked his loyal following and announced that the lively cafe’s last day would be January 1.

In the message, Morales, who didn’t respond to requests for an interview, wrote that he “wanted to create a space for that individual that had an idea, dream, or talent and help showcase whatever it was they wanted to do for FREE…most importantly, a judgment-free fun party environment.”

For the past five years, local residents flocked to the venue located at 4447 Broadway, near 190th Street. While nearby eating and drinking establishments have come and gone, APT. 78 thrived and had a loyal following.

“It had a great vibe, great people,” said Washington Heights resident Isaura Torres. “It was a great place whether you were there with a friend or just talking to the person next to you.”

Artist M. Tony Peralta said Morales created a place like no other in Northern Manhattan. Peralta, a close friend of Morales, said that the vision for APT. 78 was never about making money or pressuring people to buy more.

Instead, it was designed to be a second home for those who wanted to hang out at an extremely cool place without needing to take the subway more than 150 blocks south.

“And then when you go downtown,” Peralta added, “there are places that won’t let me in because of the way that I look.”

Morales’ parents were born in the Dominican Republic; he is a first generation Dominican-American. He grew up in Inwood, steeped in Latin culture. He listened to salsa and merengue, and loved hip hop and rap music too.

While many friends graduated from college and moved out of the neighborhood, Morales stayed and opened a business. It was his homage to a small downtown club, APT, on 13th Street – and a nod to his birth year.

Morales showcased the work of local artists and put it on his walls for exhibition. Jazz musicians played Thursday nights. Reality television star Frankie Reese and poet Lemon Anderson co-hosted a sold-out spoken word event.  He invited top DJs such as Q-Tip, Bobbito García, and Questlove to come uptown and perform. Lin-Manuel Miranda and former Yankee Bernie Williams stopped by just to hang out and listen to music.

“People really appreciated seeing these big name DJs in their neighborhood,” said Peralta. “People just really were in awe—like, ‘This is really happening.’”

Morales often allowed local non-profit organizations, small groups and even families to use the space to host get-togethers – for free.

While it was popular with uptown’s coolest crowds, that wasn’t the case with the Community Board 12 (CB12) or the New York Police Department (NYPD). Last year, CB12 voted against renewing the locale’s liquor license after the NYPD reported that minors were served alcohol.

Morales responded by implementing an ID scanner, closing earlier and training his staff to be more vigilant. But CB12 was unimpressed. But when an outpouring of support for the venue came from many quarters—including local artists, actors, a yoga studio and the Amistad Dual Language School—they voted for renewal.

“It’s been a battle,” said Peralta. While some saw APT. 78 as source of rowdiness, he said it was never a loud club that had bottle service or hookahs or a place where fights broke out regularly. “In the past five years, there have been people who have been killed in clubs. And they’re still open.”

Many see the closure as a blow.

“It was such a beautiful place,” said Torres. “It was somewhere for us to go and not to have to travel so far. It’s sad to see them go.”

Others see an even greater loss, one with reverberations for the artistic and cultural movements taking root uptown. They say that the locale and its proprietor had an open line to sharp, creative young people in the community – and APT. 78 was a haven. Peralta said organizations like the NYPD and CB12 wrongly pegged APT.78 as a nuisance and never recognized Morales’ contributions. He says the opportunity to engage him was missed.

This past Tues., Dec. 22nd marked the five-year anniversary of the establishment’s opening night.

Morales penned a note on Instagram to mark the occasion.

“12.22.2010 I remember this day clearly,” he wrote, beside photos of some of his first night patrons, which include Peralta and the Uptown Collective’s Led Black and Eileen Fuentes. “Stressed, nervous, happy, was running late, didn’t even get to shower. Peace 2 all…”

This Wed., Dec. 23rd, APT. 78 will host an anniversary party with the DJ, producer and rapper Pete Rock on the turntables.

Long-time patrons say these last few days will be a bittersweet affair.

“It’s been five years, and still no place like APT.78 has opened up,” said Peralta. “There isn’t another place like it and there won’t be another one. It’s the end of an era.” 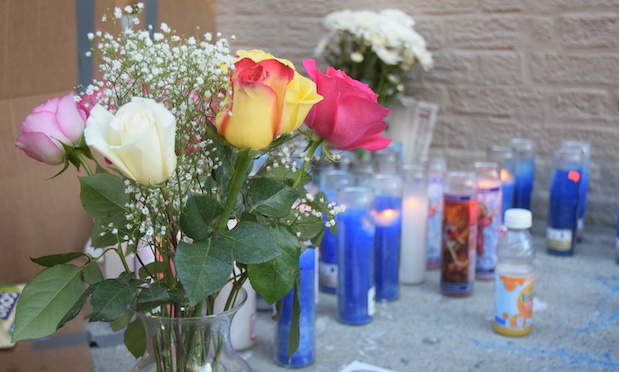