Mayor Bill de Blasio chose Washington Heights to hold the first town hall meeting of his mayoralty. The event was held at Gregorio Luperón High School for Science and Mathematics on October 14th. An energized Bill de Blasio held court taking questions and fielding complaints from the audience. The town hall’s focus on tenant’s rights is in keeping with the Mayor’s emphasis on affordable housing that has been a mainstay of his administration from the beginning. The stark inequality that seems to be only getting worse in New York City must be addressed to keep this city dynamic, diverse and vibrant.

The Harlem Hellfighters were an African-American infantry unit in WWI who spent more time in combat than any other American unit. In their honor, we featured an awesome video done in whiteboard animation style by Heredia Designs that tells their valiant story. Watch out for more in the Heroes of Color video series.

Carey Dunne of Hyperallergic took us inside the Sugar Hill Children’s Museum of Art and Storytelling, which is now officially open. The museum is housed on the lower floors of the Sugar Hill Development that was designed by “starchitect” David Adjaye. The building itself is a work of art. People, Places, and Things: Selections from the Studio Museum is the museum’s inaugural exhibit.

Jordan G. Teicher of Slate wrote a great article on the Indelible photo series by Anne Burlock Lawver. The series explores the pain, agony and enforced serenity that is an intrinsic part of getting a tattoo. Miss Lawyer spent a year taking part in the tattoo process in the now defunct Gunmental Tattoos in Washington Heights. The photos brilliantly capture the experience of getting inked.

Baseball will never be the same. Room 28 takes on baseball color commentary with the hilarious Baseball Esta Noche. Steady Feddy is back at it with his latest offering, Gettin It. The video is ably directed, as always, by Lozer Films.

Calling all witches, ghosts and goblins. The Inwood Center (5030 Broadway @ 213th Street) will once again host a safe and fun event for trick or treaters on Friday, October 30th from 3:30 to 5:30 pm. 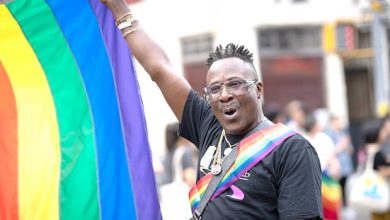 “I will not let you down”
“No los decepcionaré”