Uptown Love in the Time of Coronavirus: 100 Days & Counting

We are now less than one hundred days away from either ending our long national nightmare or making it permanent. No less than the entire American Experiment itself is at stake. It is our last chance to stop this despot who has destroyed, defiled and upended so much in less than four years. No nation, no matter how great, can withstand two terms of Trump. World renowned scholar, linguist and author Noam Chomsky put it best: “This is the most important election in human history.”

And indeed, it is. We are living through what looks and feels like a second Great Depression. The unemployment rate here in NYC rose to 20.4% in June. So, while there is no official definition of an economic “depression,” an unemployment rate near or above 20% is a pretty good indicator that things are decidedly depression-adjacent. That means 1 in 5 of your fellow New Yorkers are currently out of work.

And there is also the minor matter of a pandemic that is still ravaging the rest of the country and will most likely end up back in our backyard because of the negligence and outright incompetence of this feckless and criminally culpable President and administration. The rest of the first world has gotten their act together but we continue to muddle away as Tyrant Trump puts his re-election and his ever-so-delicate ego above the welfare of the nation. Did I forget to mention the secret national police that is actively involved in quelling legal protests in Portland?

In October 2019, the Nuclear Threat Initiative, the Johns Hopkins Center for Health Security and the Economist Intelligence Unit released the Global Health Security Index, which assessed “each country’s ability to prevent, detect and respond to health emergencies.” Out of 195 countries, the United States was ranked at the top as the country most prepared for a pandemic.

What went wrong, you might ask? Trump went wrong. From deriding the pandemic as the Democrat’s new hoax, to saying it would disappear, to telling people to inject bleach, to still (after 6 months) not being prepared, to calling it the Kung Flu, Trump could not have made matters worse. We are at an impasse and only regime change will make us whole once again.

With that said, please don’t let the polls that show Biden with a lead give you any false comfort. The polls have been wrong before. In addition, the Republican Party has for quite some time been busy working on an extensive and coordinated campaign of voter suppression. The only way we win this time around is by a total electoral tsunami that completely cleanses this country of Trump and his ilk for good. So, let’s get to it people, we have a democracy to save.

A step up
Un paso adelante 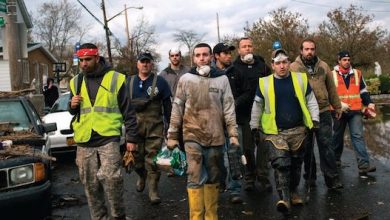