The city’s first fully bilingual coronavirus testing site is up and running in Washington Heights.

Located at 2360 Amsterdam Avenue, the site is offering testing by appointment only between 8:00 a.m. and 4:00 p.m. from Monday to Friday.  Clients are screened in advance over the phone.

The facility is operated by SOMOS, a nonprofit network of over 2,500 physicians serving immigrant and low-income populations founded five years ago by Dr. Ramon Tallaj.

Since opening on April 20, the center has tested about 100 people per day.

“We’re a small center. We’ve been trying to focus on people from the community, people who can walk into the tests site in their own neighborhood,” said Dr. Juan Tapia-Mendoza, a Washington Heights physician who is volunteering at the test center.

“Most of the people coming for tests are not middle-class Americans,” he said. “They are people who are underserved.”

Tapia-Mendoza said the bilingual testing site has served mostly Latino residents, many who are still working on the front lines in positions deemed essential such as delivery persons, building maintenance and housekeeping. Some lack insurance and many are undocumented.

“It’s important that people have access to these services in their language, and in a culturally responsive way,” he said.

Testing slots are strictly by appointment and clients must meet certain criteria such as exhibiting symptoms, or having close household contact with a COVID-19 positive individual.

Residents can be away because they do not have that appointment, explained Tapia-Mendoza.

“We treat people with compassion. We take the time to explain things to them and provide them with information on the virus,” he said.

Testing priority is given to people with symptoms, essential workers, and people who live or work in close contact with someone who is sick.

About 70 percent of the people tested at the Washington Heights location are referrals from the DOH hotline, with the rest coming from SOMOS network referrals.

The site is staffed by supervising physicians like Tapia-Mendoza who have left their other practices during the pandemic to better serve people on the front lines. SOMOS also runs two separate drive-through sites, including one at Lehman College in the Bronx and another at the Aqueduct in Southeast Queens.

“We don’t get paid. We’re here because we want to be at the forefront of testing people,” Tapia-Mendoza said.

Tapia-Mendoza noted the challenges posed by the population density in Northern Manhattan, which makes it difficult to isolate from others or quarantine if experiencing symptoms.

“It’s practically impossible to isolate from one another,” he said. “In this area, people are very much into living with extended family. If I live in an apartment with six other people, where am I going to go?”

He said the city’s use of 11,000 hotel rooms to help isolate COVID-positive patients could prove to be an important strategy in driving down new cases.

“There are a lot of hotels and we might need to look at other spaces where we can isolate people who test positive for two weeks,” Tapia-Mendoza said. “We also need social workers to follow up with infected. Once you get tested, there should be constant follow-up.”

Moving forward, the most important factors in curtailing the virus in New York City will be widely expanded testing and contact tracing.

“The only way that New York can get back to business is by testing everyone, especially in hot spots that are already suffering from many health issues,” he said.

A pediatrician, Tapia-Mendoza is the founder and president of Pediatrics 2000, a group of health clinics for children.

He voiced concern about a potential future spike in illnesses, as families are not bringing their children to receive routine vaccinations during the pandemic.

“Thousands and thousands of kids are not getting immunized for diseases like measles, mumps, tetanus, hepatitis B. These diseases that we’ve had under control for many years, we could see a spike,” he said. “A child that does not get immunized against HPV stands risk of serious health issues. And when a child is not vaccinated, it could spread to elders.”

The SOMOS network is running five testing sites and is involved in free meal distribution.

One of the meal distribution sites is La Nueva  España, where SOMOS has partnered with World Central Kitchen and the Maestro Cares Foundation to distribute thousands of meals.

“It’s incredible to see the effort that’s happening. There have been 50,000 meals handed out at various locations,” Tapia-Mendoza. “People are in need.”

Tapia-Mendoza urged New Yorkers to follow social distancing guidelines and other instructions from the Health Department.

“The two most important things we can do are very simple, maintaining social distance and washing our hands,” he said.

“There is no vaccine yet for this virus. The solution is not treatment — it’s prevention,” he added. “I think, understanding that, we will defeat this virus. There is a light at the end of the tunnel.” 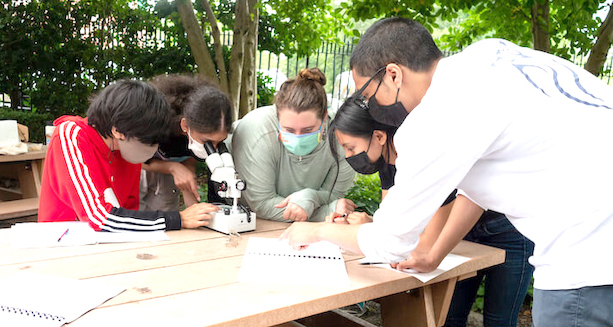