Yes, there is such a place, and closer than you might think.

Earlier this year, the Center for Urban Future, a New York City-based think tank that focuses on growing and diversifying the local economy and identifying problems facing low-income and working class neighborhoods, found that of the ten New York Public Library (NYPL) branches with the highest circulation, six were in largely immigrant communities.

The three systems of the New York Public Library (Brooklyn, Queens and New York), have experienced a 40 percent increase in the number of people attending educational programs, and a 59 percent increase in circulation over the past decade. And in the last five years, computer sessions at the library have increased by 62 percent.

All of this growth has happened in spite of the fact that in the past decade, the library systems have experienced an 8 percent cut in city funding.

The city’s libraries, it seems, are thriving places.

The Bronx Library Center in Kingsbridge, the largest public library in the borough,

The branch is a state-of-the-art, $50 million, 78,000 square foot structure that opened its doors in 2006. It also features the New York Public Library’s premiere Latino and Puerto Rican Heritage Collection.

It may be cold and windy outside, but inside The Library Center, it is a bustling hub of activity, in which some floors lend themselves to silent study, and others offer a far more social setting. The Center sees a steady stream of visitors from the moment it casts its doors open at 9:00 a.m. until closing at 9:00 p.m. on most evenings.

On a recent afternoon, on the Center’s lower level, a gathering of the Wii Bowling Club was under way.

Vincent Grant waited his turn to bowl on the screen, offering criticism and encouragement to his fellow players.

For Grant, the library is a good place for socializing—offering good fun, free of charge.

“I come here, play the Wii, get on the computer, mingle,” he said.

Leon Spann is a veritable library regular, visiting a few times a week.

“I get books, DVDs, use the internet, network with my friends and socialize,” said Spann. “It’s a community.”

Next to him were a pile of DVD’s and books. Among them was a self-help book, Reposition Yourself: A Life without Limits and the DVD’s Total Recall and Will and Grace.

On the top floor, Denise Hurst had an entirely different focus. She sat in front of a computer on the fifth floor, where the silence rivaled that of a cathedral.

“I come here to check my emails, and search for a job,” she explained.

Robyn Saunders, who provides the library’s Career and Education Information Service, also has her office on the fifth floor.

Saunders helped Hurst work on her resume and with her job search, and now Hurst has two job interviews lined up.

In this economy, the library is a boon for job hunters.

“We’re getting so many people,” said Saunders. “The library is a resource.”

“The difference between coming into the library and accessing information on the Internet is that you have someone who is guiding you,” she added.

While the library provides material resources, it also has personnel who are keen to serve.

They happily read books, play on the computers, chat among themselves.

Most are accompanied by backpacks, as they have come straight from school.

“This is the one place they can come all the time,” said Russell. “The kids enjoy it and it’s safe.”

All throughout the library were students of all ages immersed in books and computer work.

“A lot of kids are doing schoolwork on computers here because they don’t have computers at home,” said Russell.

One of the quietest nooks at the library, ironically, was occupied by teenagers.

These members of the ARTistic Teens club meet every Friday afternoon. They worked assiduously, with their heads bent over large, colorful portraits.

Chavaughn Christie, 21, is an art club regular, and his work is on display on the first floor. He also classified himself as a library junkie.

“I get bored at home,” said Christie, who likes to read science fiction. Christie also credited the library for helping him pass his General Educational Development (GED) exam since he was able to borrow a study guide instead of having to purchase one for $50.

In the lower level of the library, several different kinds of students take turns at different programs. There are ESOL (English for Speakers of Other Languages) classes, adult literacy classes, a pre-GED life skills program, a homework help class, and several basic computer classes, including how to use e-mail and MS Word for beginners.

At the Inwood Library on Broadway near Dyckman on a recent Thursday evening, the scene was similar.

Three dozen students were gathered in a half circle as they discuss winter activities with their teacher, Brian Tauzel.

This was no mere chit-chat; this was an ESOL class.

While the Inwood Library was not on the top ten list of branches with most increased circulation and usage in the study done by the Center for Urban Future, it is still a thriving center, and first resource for recent immigrants.

Kari Papin has been in New York City for three months now.

A native of Paris, France, she says the class has helped her be more conversant in English.

“I understand what people say to me, but to answer is hard,” she said during the class.

Francisca Victorio, from Puebla, Mexico, is not a newcomer to the city.

After living in New York City for over 20 years, she finally has time to learn English—though more time has not made it any less difficult.

“Everything is hard,” she lamented of learning English.

Previously, she worked at a factory, where Spanish was the lingua franca, and was also busy raising her children. Now, Victorio works at a laundromat and says the class had helped her learn her numbers—a necessary tool in discussing change, and pounds of clothing.

“I really want to learn,” she said.

Tauzel, the instructor, spoke of the importance of the English class in a community where Spanish speakers make up the majority of the population.

“This is the only place where they can speak unbridled English [without fear of mistakes],” he noted. “It’s safe here to play with the language.”

At the Inwood Library, students also have the opportunity to make their way, and missteps, on the computer.

The computer class is taught by Yajaira Mejía, who is also the branch’s managing librarian. In this era of budget cuts, staff members wear many hats.

If she had more of a budget, Mejía said she would like to offer more classes—perhaps a Lifetime Arts class for seniors, more computer classes, and definitely more ESOL classes.

Currently, the ESOL classes are offered three times a week: on Mondays, Wednesdays and Saturdays.

“They fill up pretty quickly,” she noted.

While classes fill up quickly, Mejía has found that materials on the shelves run out quickly—especially language learning materials.

“We have to do constant replenishing.”

Luckily, the library’s floating collection, which allows branches to share materials with each other, mitigates some of the losses.

One glance at the shelves that hold the English language learning materials revealed a touch of disarray, with wide, gaping spaces between the books.

Mejia sighed as she began to organize the section for the umpteenth time, and smiled.

She said she did not mind the mess.

“That’s how you know they’re being used.”

For more information on classes offered at the Bronx Library Center, visit www.nypl.org/locations/bronx-library-center.

For more information on classes offered at the Inwood Library Branch, visit www.nypl.org/locations/inwood At a Glance: NYPL

Center for an Urban Future; “Branches of Opportunity”; January 2013 www.nycfuture.org 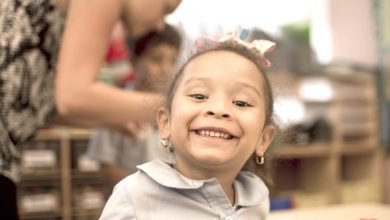 “Together we found a way”
“Juntos encontramos un camino”