This is the sixth in a series of articles about Moose Hall Theatre Company’s summer season.

Opening night is just two weeks away and Catherine Bruce has a long list of things that need to get done.

That list involves a trip to Materials for the Arts (MFTA).

The trip is a combination shopping extravaganza and big game expedition.

MFTA is based on the idea that one man’s trash is another man’s treasure.

It’s not unlike a giant city-run Salvation Army that accepts donations of furniture, craft items, fabric, notions and other random stuff.

Non-profit theaters, schools and other organizations get to take what they want for free.

In return, they must write thank-you letters to the donors, describing what they did with the booty.

Getting there involves driving a big car to Forest Hills, Queens.

Finding parking close by is difficult. It pays to get there early. Most of the good items are snapped up right away.

Bruce, Moose Hall Theatre Company’s technical director, was hoping to find specific items. She needed a sturdy chair for the scene in King Lear where Gloucester is blinded.

Their last good chair gave up the ghost in Dracula. She also wanted something that could be transformed into stocks that keep Kent imprisoned.

She found neither. The chairs were too modern—discards from dining room sets or uncomfortable office chairs. She briefly considered the possibilities of converting a small shelf into a stockade.

She envisioned the character playing Kent with his feet stuck in them, and ultimately abandoned the idea.

“I know he’s going to want something cool,” she said. “I can make something better than this.”

She did find two great velvet dresses—one red and the other blue—perfect for both Regan and Goneril.

Bruce looked longingly at another shopper’s cart, containing a bolt of ruby red shiny fabric. The designer who spotted it first wanted it for a set he was building that included a replica of the Kremlin. It would have been just right for the flags and banners Bruce wants to build.3

Bruce wanted something silver for Cordelia to wear under her battle vestments.

She only had to convince the director, her husband Ted Minos, that Cordelia should die in a silvery gown.

This production of King Lear is set sometime around 500 A.D., not in the time of Stonehenge as the play indicates.

“If we do that, every one will be dressed in skins and sacks. So we took it up a thousand years so people can actually wear clothes,” she said.

Shakespeare himself allowed anachronisms in the play. There was no King of France—much less a country called France—back then.

Instead they say, “Break a leg.”

Only foolhardy souls utter the word “Macbeth” anywhere near a stage.

Instead, they refer to it as “that Scottish play” because its association with witches, magic and evil deeds is supposed to wreak havoc just by uttering the word.

Another theory, unrelated to theater, posits that if it rains on Shavuot, it will be a rainy summer. Celebrated seven weeks after Passover, Shavuot is – among other things – the Jewish holiday commemorating the day God gave the tablets to Moses.

Its relationship to future weather is unclear.

According to the National Oceanic and Atmospheric Administration (NOAA), the city had 10.66 inches of rain that June.

That’s significantly more than the 6.55 inches the year before or the 2.20 inches a year later.

That June, it rained more than half an inch on 10 days.

It was Moose Hall’s rainiest season.

Rain drowned out the opening night of Moose Hall’s production of Merchant of Venice and many subsequent performances.

InwoodHillPark is Moose Hall’s performance space. If it rains even a little, actors get wet. Footing is slippery and audiences tend to stay home. If it rains a lot, the show is cancelled even if the actors want to perform. Water does permanent damage to sound equipment.

On the day before Shavout last week, Bruce was a little concerned about the rainy weather forecast.

The next day was cloudy, with a bit of drizzle.

To go shopping with Catherine Bruce and hear about the last time she built a coffin, please visit http://bit.ly/MT_118. 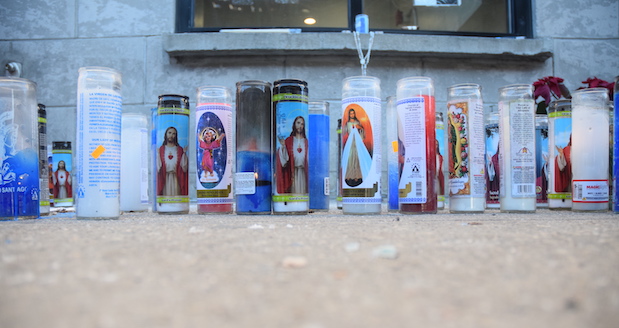