A revised version of the Inwood rezoning plan was approved by two City Council committees on Thursday morning.

Despite pleas from community members to reject the plan, which they said would drive low-income residents and small businesses out of the neighborhood, the amended proposal, which was backed by local Councilmember Ydanis Rodríguez, passed the Committee without opposition.

Immediately prior to the hearing, Rodríguez announced to reporters that the plan had undergone numerous eleventh-hour alterations, including the removal of the highly debated “Commercial U” portion of the rezoning area — the commercial hub encompassing Dyckman Street, Broadway and 207th Street.

“I have carefully listened to my residents and the local small business owners. I’ve heard loud and clear that the rezoning was too large, and would definitely change the character of our neighborhood,” Rodríguez said. “For that reason, we have negotiated to remove the ‘Commercial U’ from the rezoning.”

With a large portion of the original rezoning area off the table, the revamped plan now focuses on rezoning the Sherman Creek area east of 10th Avenue. The rezoning would bring about 1,500 new affordable units to the neighborhood, according to plan documents posted by the City Council. The Department of Housing Preservation and Development would also preserve an additional 2,500 affordable apartments.

According to documents, an estimated 675 new affordable homes would be created on private land through the city’s Mandatory Inclusionary Housing program, while 925 new affordable units would be built on public land.

The city would also agree to give up property currently used by the Department of Transportation and Sanitation Department in order to build 100 percent affordable housing, the plan said.

Rodríguez also announced that the city would introduce a “commercial rent regulation” program in Inwood that would include 10-year leases with limited rent increases for small businesses.

He also touted the creation of a STEM Center, to be run by the City University of New York (CUNY), and an infusion of approximately $50 million to upgrade the George Washington Educational Campus.

Rodríguez said he negotiated improvements to the plan from the city, which provided about $500 million in commitments to Inwood — about $200 million in rezoning-related funding, with the rest coming for other projects Rodríguez deemed beneficial to the community. When asked if the changes to the rezoning plan would assuage the many concerns of Inwood residents, Rodríguez replied, “I believe it does.”

“I believe that this is a good plan that we put onto the table, and we hope that when the residents will [hear it], they will be fine.”

But after hearing details of the revamped plan, opponents were not moved.

“I feel taking out the U was the least they could have done. To me, that’s not a great victory,” said Ava Farkas of the Met Council on Housing. “I think still, at its essence, this plan is problematic because it’s not going to create housing that’s affordable to Inwood families.

Previous opponents were not moved by the revisions.
Photo: C. Vivar

“The DOT and Sanitation sites weren’t even part of the rezoning plan,” said uptown resident Nancy Bruning. “Why is this something they are trying to add now?”

“We could be waiting years for these public sites to come online,” Farkas said. “Now it’s just promises. It’s like an I.O.U. from the city.”

Bruning said she was “cautiously optimistic” about revisions to the plan.

“I think this is a pretty good start,” she remarked. “We need to see more details.”

Inwood resident Jennifer Bristol said the city should not have waited until the last minute to add concessions.

“The mayor should be interested in providing investments anyway because of the history of disinvestment in that community,” said Bristol, who remarked that many Inwood residents could still be displaced due to rising rents. Activist Lena Meléndez called on the de Blasio administration to put a moratorium on new rezonings until the effects of other rezonings could be analyzed further.

“Until we can study the negative effects that these rezonings are having on primarily low-income neighborhoods, that is a main problem,” she said. “They’re shitting all over people who are poor.”

She said the city’s Universal Land Use Review Process (ULURP) was flawed, as was the city’s outreach to the community during the rezoning process.

“These rezonings have been forced rezonings. There’s a lot of things that are wrong with this plan. The ULURP process was not made available to people that were monolingual Spanish speakers in a 70 percent immigrant community. That is an outrage.” “They’re shitting all over people who are poor,”
said Lena Meléndez.

After the hearing, Rodríguez remained steadfast in his support for the revamped plan.

“I know that one of the top demands from the organizers was to downsize the rezoning, to protect the landscape of Inwood, and that’s what we did today,” he stated. “It took a lot of hours of negotiation.”

Mino Lora, Executive Director of People’s Theatre Project and Chair of the Northern Manhattan Agenda’s Arts and Culture committee, applauded the increase in arts-related funding included in the lastest rezoning plan. “I am proud to see that arts and culture became such a priority in the modified rezoning plan for Inwood. The inclusion of an Immigrant Performing Arts center inclusive of a theater and rehearsal rooms is historic, incredibly needed and a commitment never before seen in any of the most recent NYC rezoning plans. This speaks highly to our Councilmember’s strong leadership in putting this on the top of the negotiating table and to the advocacy of our diverse artistic community uptown.”

“Today’s committee vote is the first step to ensure Inwood becomes a fairer and stronger neighborhood. It means security for families who deserve to stay in the neighborhood they love, and new education, employment and community investments that will open opportunities for lifelong residents and new immigrants alike,” said Mayor Bill de Blasio in a statement. “We’re building and protecting affordable homes at a record pace. Today’s vote means thousands more families in Inwood will have the security of affordable housing, and rent they can afford. We’re adding new resources for tenants across Inwood to fight harassment and evictions.” “I believe that this is a good plan,” said Councilmember Ydanis Rodríguez.

Manhattan Borough President Gale Brewer, who had opposed the initial plan by the city, said the updated proposal comes closer to solving some of the flaws.

“Today’s announcement doesn’t solve every problem. We still need more resources for legal services and tenant support to prevent displacement and preserve rent-stabilized housing,” she said. “The city should also be making every effort to purchase the Charter-Spectrum site at 218th Street and 9th Avenue and redevelop it to produce more affordable housing. I will continue pushing for these and other priorities, as my office scrutinizes the details of today’s agreement.”

Editor’s note: This article has been amended to reflect Mino Lora’s clarification on her support specifically for the cultural resources reflected in the rezoning plan. ‎”Any rezoning plan should address the needs of the arts and culture immigrant community, and I believe this modified version does,” she states. Lora stressed that, as the head of a community-based arts organization, she would not take any official position on the rezoning plan or votes cast. 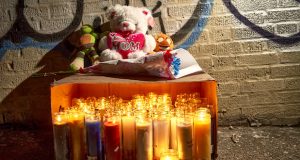