The campaigns are in full gear, as evidenced by the debates, the ads, and the literature. Voters are presented anew with the choice in this election season, in some instances, to elect new leadership, and in others, to choose between challengers and incumbents.
As we near Primary Day and Election Day, we will speak with the candidates about their vision for New York and its residents. Some faces will be new; others’ names might be a bit more familiar.
Get involved, get informed, entérate.
And above all, make your voice heard.
Vote. Vota.

California has Silicon Valley; New York has an Alley.

Members of New York City’s tech community, known as the citizens of Silicon Alley, gathered on Tues., Aug. 20th to support one of their own, Reshma Saujani, in her run for Public Advocate of New York City.

Saujani, who served as Deputy Public Advocate under Bill de Blasio, is also founder of the non-profit Girls Who Code. Created in 2012, the organization seeks to aid young women to pursue academic and career opportunities in computing fields. It also aims to provide computer science education and exposure to 1 million young women by 2020. The organization teaches young women to code in a matter of weeks, and some of its pupils have even presented their app ideas to Sheryl Sandberg, the Founder of the Lean In Foundation and Chief Operating Officer (COO) of Facebook.

Some other tech luminaries were present, including Rachel Sklar, founder of The List and Change the Ratio, and Nate Westheimer, the founder of NY Tech Meetup.org.

“We need you to get out the vote,” said Westheimer to approximately 200 guests in attendance. He challenged each of the attendees to bring three other people to the polls and vote for Saujani.

“There are candidates who come into the room and regurgitate what their advisor told them to say. And then there’s the candidate that already knows what to say. They’re native to your community; they know what you care about because they care about it. When I met Reshma four years ago, right off the bat, I could tell this is what she was,” said Westheimer.

Rachel Sklar was equally enthusiastic in discussing with The Manhattan Times and The Bronx Free Press her own reasons for supporting Saujani.

“Reshma has an amazing record,” said Sklar. “She’s a clear and proven public servant and she has great ideas. She has an amazing vision in starting Girls Who Code [and there is] the implementation of that vision, really fast, really smart, really effectively.”

Sklar, who is Canadian and won’t be able to vote, also said New York City needs someone “who will react nimbly, creatively and effectively.”

While data from the New York Campaign Finance Board shows that only 4 percent of 18 to 29 year-olds voted in the 2009 municipal elections, Sklar had faith in the tech set’s ability to get out the vote among their millennial peers.

“The New York tech scene has matured a great deal since it strolled into being as a real-live community that had an impact. People are genuinely engaged, activated,” she said. “They know what’s going on. They want their ‘I Voted’ sticker on Foursquare. They want to Instragram themselves at the polls at the very least.”

“While the tech scene gets a rap for being filled with young eager kids hacking into the night, these are adults,” she added. “For the most part, I don’t think people would come out to these things if they were not actually engaged.”

The candidate herself also extolled the virtues of the diverse communities for which, she argued, she’d already been an advocate.

In a private interview, Saujani spoke about her experience, ideas, and qualifications.

She was born in Chicago to South Asian immigrants who were political refugees from Uganda and studied public policy at Harvard and law at Yale. She worked on Wall Street and became Deputy Public Advocate in 2010.

“What brought me to New York City was a lot of student loan debt,” she smiled. “I graduated from law school and did my masters, came here and thought I’d pay it off in a couple of years and then do public service, but two years turned into ten.”

Saujani said she knew that her own experience of flocking to the city for economic and academic opportunity was comparable to that of many – and one on which she will draw if elected. And her commitment to her family remains strong, noting that she sends money home to her family to help them pay rent.

It is hard for Saujani to pinpoint one issue as New York City’s biggest.

“I want to cheat and say jobs and education. Housing is in the top three.”

She points out that the three are related.

With Girls Who Code, Saujani has tackled the education gap between the jobs that are available in the tech industry, and those disconnected from that source of potential employment.

“We have got to retrain our workforce, and one of the most powerful things I saw with Girls Who Code was I was able to teach 16 and 17 year-old girls with little or no exposure to computer technology how to computer program in weeks. And they started teaching their parents.”

Saujani is especially proud of her work with the organization.

“I don’t think anyone in this crew who’s running for this office has built something, and I have.”

Getting communities engaged in a way that will help them—and help them help each other—is a key part of the job, explained Saujani.

It is also something that her former boss, current Public Advocate and mayoral hopeful Bill de Blasio has done well, she said.

“He really built out the organizing element of the office, to make sure we get communities engaged from the ground up,” she said. “That’s exactly what we’re trying to do as well.”

Saujani said her experience as Deputy Public Advocate has helped her prepare for the post she seeks.

During her tenure in the office of the Public Advocate, Saujani helped build a coalition for accountability on spending, and started the DREAM Fellowship to help undocumented immigrant students to go to CUNY.

“One of my biggest strengths is that I’ve had experience in the office,” she noted. “I can hit the ground running.”

Saujani wants too to tackle the digital divide, and one of the first things she’ll do if elected is plot the divide in an effort to understand where resources need to be invested. A recent report issued by Manhattan Borough President Scott Stringer found that one third of city residents and 75 percent of NYCHA residents did not have access to broadband.

“Technology is not [just] cool, it’s not the future,” she said. “It’s the current and so not having Internet access in your home, your building, your park, your school makes a difference between whether you’re going to run up in the middle class or you’re going to have to crawl up into it.”

Saujani said she wanted a prime focus of her own tenure as Public Advocate to be alleviating poverty.

“There are way too many people living below the poverty line,” she said. “It’s not a legislative office. It’s a roll-up-your-sleeves and just kind of get things done kind of office, and I did that as a Deputy Public Advocate.”

If elected, Saujani will be the first South Asian woman to hold a seat in the City Government. And she is the only candidate in any race this year to feature her dog, Stanley, on mailers. Stanley, a bulldog mix, also has her own Twitter account.

For more information about Reshma Saujani’s campaign, visit www.ReshmaForNewYork.com. For more on Stanley, check out her handle: @stanleythepuppy. 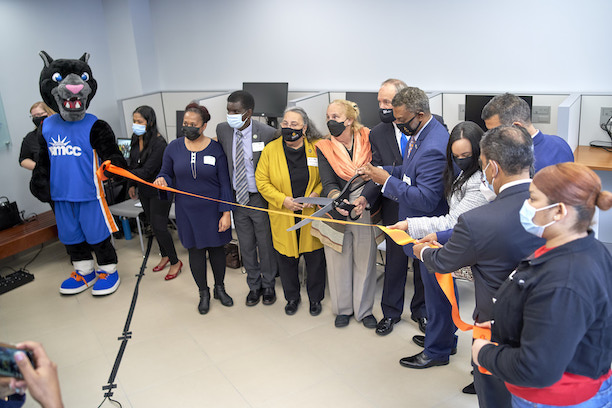 On the waterfront
En la ribera