The moment unscrupulous actors set up an illegal gas hook-up, they start the clock on a dangerous timer that puts the fate of that building, as well as the people in and around it, at serious risk.

And clocks like this have been ticking all over Washington Heights for months.

The problem of illegal gas hook-ups came into focus after an unlawful connection led to an explosion that caused four deaths, at least nineteen injuries and the destruction of three buildings. Multiple individuals and families in the affected area lost their homes and businesses had to close amid the wreckage and debris.

The consequences of these dangerous hook-ups reach far and wide, and yet alarmingly, such cases of illegal gas hookups may be more common than we are currently led to believe.

A recent tip about illegal gas hook-ups in eight buildings in northern Manhattan and the Bronx, reported first to ABC 7 Eyewitness News, revealed that these buildings, all owned by Alma Realty, were using an illegal gas connection. ABC reported the tip to Con Edison, who verified the claim and shut off gas either partially or entirely to all eight buildings.

Five of the eight Alma Realty-owned buildings found to be using an illegal gas hook-up are located in Washington Heights, including one in my district at 600 W. 161st street.

Not only were the tenants in that building put in jeopardy, but the aftermath has made regular day to day tasks challenging, forcing tenants to spend more on food and laundry.

Although the landlord could face penalties or fines after the city reviews the violations, preemptive safety measures are lacking. More proactive efforts from the city and utilities companies are essential to provide meaningful assurances of security to tenants.

One bill I proposed with Councilmember Elizabeth Crowley of Queens earlier this year, Intro 738, would improve safety by creating a robust standard for plumbers to perform this sensitive gas work. It would create new testing and licensing requirements for non-master plumbers seeking to do gas-line repairs, removal or installation.

But to prevent another tragedy, there’s even more that we can do. Con Edison reports that in the last year, they found only 150 cases of illegal gas hook-ups out of their 1.1 million customers.

That’s a rate of .01 percent and it strains credulity.

It’s time to think creatively about how we can catch more of these illegal gas hook-ups. In the coming months, I look forward to working with utilities, the Department of Buildings and my colleagues on the City Council, so we can get in front of this issue with solutions that will protect the public. The security of tenants in Washington Heights and around the city demands no less. 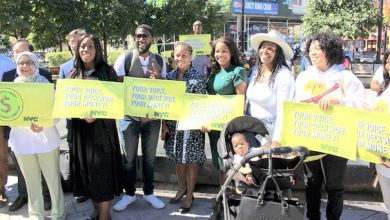 The Kids Are Out – Now What? Los Chicos Están Fuera—Y Ahora Que?