Dr. Craig Spencer, the city’s only confirmed Ebola patient, marked the one-year anniversary of his first day at Bellevue Hospital Center last year with a return to the Health and Hospitals Corporation (HHC) facility.

The Harlem resident visited the center on Tues., Oct. 20th to thank the doctors, nurses and medical staff that helped him wage battle against the virus.

“I am here today because of the brave and remarkable commitment of so many nurses, doctors and other team members from Bellevue Hospital,” he said in a statement.

It was on October 23rd, 2014 that Spencer was admitted to HHC Bellevue for 19 days of treatment.

On Tuesday, he greeted and embraced staff that cared for him during his time in isolation in Bellevue’s Infectious Diseases Unit.

“My gratitude is as profound and intense as the day I left the hospital nearly one year ago,” he said. “And I will undoubtedly be forever thankful.”

Spencer returned to the city on Oct 17th, 2014 from a trip to Guinea with Doctors Without Borders, during which he had delivering medical care to Ebola-stricken patients. Upon his return to the city, he took ill and was subsequently admitted. He left 19 days later, on Nov. 11, 2014, when doctors declared that he was healthy and able to be discharged from the hospital.

“A whole team of doctors, nurses, lab technologists and support staff all contributed to Dr. Spencer’s recovery,” said Dr. Laura Evans, Director of Critical Care, Associate Chief of Medicine at Bellevue and the lead physician who cared for Spencer.

“It’s good to get everyone together a year later to see how well he’s doing and to celebrate with him,” she said.

In July, Bellevue was designated a National Ebola Education and Training Center. It allows Bellevue experts to work on ensuring that health care providers throughout the country are prepared to safely

identify, isolate, transport and treat patients with Ebola and other potential emerging threats. The facility was also named a Regional Ebola and Special Pathogens Treatment Center, one of just nine national referral centers for patients with Ebola or other severe, highly infectious diseases.

"You have an ally" El Alcalde en el Alto

Stand up for Your Health Defienda su salud 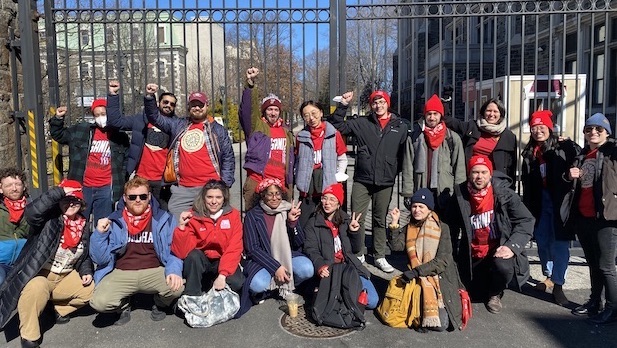