Man in the Mural

Camilo José Vergara has a thing for the King.

The photographer doubles as a curator during his immersive tours of the streets of America in which he documents the many likenesses of Martin Luther King Jr., found in murals throughout the country.

Vergara is a Chilean immigrant who was awarded the National Medal of Arts and Humanities by President Barack Obama in June.

On Wed., Aug. 21, his photographic exhibition of the Martin Luther King, Jr. murals was on display at 1900 Lexington Avenue, which is managed by Manhattan North Management and Tahl Topp Properties. The event was also hosted the Greater Harlem Chamber of Commerce, and came just days before the 50th anniversary of the March on Washington, D.C. in which King delivered his “I Have a Dream” speech.

That the exhibit was up for only a day paralleled the short-lived existence of most murals.

The lifespan of a mural is dependent on many variables, from ownership of the building, to the sturdiness of the edifice, the ravages of weather and time, and the aesthetic and cultural preferences of the day.

“The murals are welcomed when they capture the spirit of the place,” said Vergara.

When using the cityscape as their canvas, muralists have much more freedom than if they are collaborating with entrenched institutions, political or otherwise, he argued.

“It allows for spontaneity for come through. They are not repeating the same model over and over and over. They have the freedom not to do King as he was, but as they see him,” he explained.

Throughout his travels, Vergara has observed that images of Martin Luther King reflect the communities which have proudly displayed his likeness.

Most often King is surrounded by other historic Black figures, like Malcom X and Nelson Mandela. Sometimes he and President Obama stand side by side.

But his features become more malleable as they enter different communities, said Vergara, who swore that King looks almost Asian in a mural in a predominantly Asian community in Chicago. In another, he looks Toltec and is surrounded by La Virgen de Guadalupe and Emiliano Zapato; in yet another, he plays the guitar.

“Who ever heard of Martin Luther King playing the guitar?” mused Vergara.

This appropriation of the civil rights leader is what Vergara loves about the murals, and is, for him, an indication of the leader’s universal appeal as evidence by the countless individuals throughout the country – and the world – who have adopted his physical resemblance and embraced his message.

As such, there is not an ideal time or place to honor him, noted attendee Lloyd Williams, President and CEO of the Harlem Chamber of Commerce.

“There is no location or economic strata that is not appropriate for Martin Luther King. He was a man of the people, for all the people.”

The exhibit was also part of Harlem Week. This year, the festival celebrates the 150th Anniversary of the Emancipation Proclamation, and the half-century that has passed since the March on Washington and the “I Have a Dream” speech.

One facet of the commemoration was to honor the historic events; another was to keep history ingrained in the collective memory. And King, in the likenesses displayed at the vacant storefront, continues to capture the public’s attention 50 years later.

Joseph Tahl, the President and co-founder of Tahl Propp Equities, which owns 1900 Lexington, was also on hand for the exhibit.

“With the 50th Anniversary of the March on Washington, it makes you think of all Martin Luther King has accomplished,” said Tahl.

He felt people should look to King more often as a good example of selflessness; in his own collaborations with the community, Tahl said it was a model that he has sought to incorporate.

He noted that 1900 is searching for a retailer to occupy the first floor where the exhibit is being held.

“We are going to stress renting to local businesses,” he said.

The rest of the building also has 134 units of affordable housing.

The building’s façade is glass, however, making a mural difficult to render.

For muralists like Lance Bradley, whose own rendition of Martin Luther King was photographed by Vergara, it might be an inspiration.

Bradley’s Harlem mural, based on a photograph of Dr. King, is directly across the street from another mural he painted of Barack Obama after he took office.

“The energy from the election of Barack Obama became an Orpheus,” said Bradley. “I returned to paint Martin Luther King, and it made both murals complete.” To learn more about Camilo José Vergara, visit www.camilojosevergara.com.

“For more than four decades I have devoted myself to photographing and documenting the poorest and most segregated communities in urban America. I feel that a people’s past, including their accomplishments, aspirations and failures, are reflected less in the faces of those who live in these neighborhoods than in the material, built environment in which they move and modify over time. Photography for me is a tool for continuously asking questions, for understanding the spirit of a place, and, as I have discovered over time, for loving and appreciating cities.” Camilo José Vergara

Why I am Running
Porque me postulo 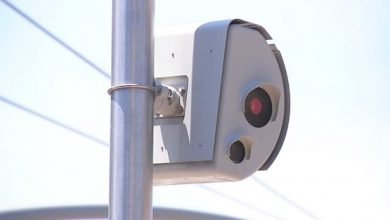