“It took us by surprise”
“Nos tomó por sorpresa”

“It took us by surprise” When Mayor Bill de Blasio and City Council Speaker Corey Johnson announced in December 2019 that the city was committing to provide another $54 million annually to nonprofits for funding overhead costs, human services organizations were heartened.

“It was like a light at the end of the tunnel,” remarked Maria Lizardo, Executive Director of Northern Manhattan Improvement Corporation (NMIC), which provides legal assistance to residents in Northern Manhattan and the Bronx. “The money we get from city contracts doesn’t cover much of our operating expenses, so we were thrilled to think we’d have more of our essential costs covered.”

The Indirect Cost Rate (ICR) funding initiative was designed to help nonprofits with city contracts by paying them more to cover indirect costs, which can include rent and payroll as well as IT, maintenance, human resources and accounting expenses.

However, after the COVID-19 pandemic wreaked havoc on the city’s finances, de Blasio and Johnson declared they were slashing $20 million a year from the initiative — including retroactively from FY20 — as the city’s latest budget was approved.

The about-face left many in the nonprofit sector stunned.

“It took us by surprise. Both the mayor and the Speaker hailed [ICR funding] as a groundbreaking initiative, said it was going to stabilize a sector that was operating for many years without full funding,” said Nora Moran, Director of Policy and Advocacy at United Neighborhood Houses (UNH).

“It’s very frustrating for organizations when the funding that was promised to them not that long ago is taken away,” Moran said. “It leaves nonprofits questioning whether the city values the work that they do.” When ICR was announced last December, Speaker Johnson remarked that “community-based organizations are our partners in government but for too long, they didn’t always get the complete funding they needed.”

Gregory Morris, President and Executive Director of the Stanley M. Isaacs Neighborhood Center, which services residents in need from the Upper East Side through Northern Manhattan, said budget cuts to ICR would mean human services providers will continue to be shortchanged.

“The city has paid us 80 cents on the dollar for city contracts,” Morris said, noting that contract payments do not typically cover a nonprofit’s operating costs

At NMIC, only 10 percent of what the organization earns on a city contract can be earmarked to cover indirect costs, Lizardo said.

“Those costs support the backbone of the organization,” Lizardo explained.

“When we don’t get the full indirect costs, that’s when we need to cut corners. We might not get the best equipment, we might not have as many support staff,” she said.

To participate in ICR, nonprofits throughout the city were required to estimate their actual indirect costs and submit an application to the city.

In August, the de Blasio administration advised service providers that budget cuts to ICR would be achieved by providing nonprofits with only 60 percent any new funding they had been approved for related to FY20.

In a statement, the de Blasio administration acknowledged the difficulty the cuts would pose for nonprofits but said “painful” budget decisions were required.

“The fiscal crisis due to COVID-19 lead to tough budget circumstances, but we remain committed to supporting nonprofits however we can in this new reality,” the Mayor’s Office said.

“Due to revenue losses, we had to achieve billions of dollars in savings, which included very painful cuts to programs and services. Many of the cuts, including the reduction in funding allocated to indirect costs, were made jointly by the Administration and City Council,” the statement continued. “We recognize this is a challenge for providers who elected to go through the indirect cost rate initiative, so since adoption [of the budget] have agreed to cover 60 percent of provider’s accepted indirect cost increase and ensure a minimum indirect cost rate of 10 percent for FY20.”

After applying to the ICR program, the Isaacs Center had been approved for funding at an 18 percent indirect cost rate for FY20, which equated to over $362,500. Residents in need have had food delivered.

Following the budget cuts, that amount had been cut to $217,500, Morris said.

“I’m in a position where I have to start over, after planning for funds I thought I’d have,” Morris said. “At this moment in time, when we’re already in a budget crunch and facing even greater need, it is literally agonizing to go through this.”

“We spent money doing the analysis and application, just to then be told they’re not going to honor that agreement,” she said.

Lizardo said the budget cuts would require her organization to cut an adult literacy class and several slots in a youth support program.

“I do think the city had the best intentions but Covid has really derailed its financial situation,” she remarked. “The nonprofit sector will be key to the recovery and the rebuilding of New York City. We can’t do this work unless we get more funding. We’re very scared for the sector.”

The budget cuts come at a precarious time, as both Lizardo and Morris said operating costs increased for their organizations during the pandemic. As with most nonprofits, they were required to purchase PPE, cleaning supplies and other protective measures to operate during the pandemic.

Moran said there have been layoffs within the settlement house network and there could be more on the way. Many organizations have adapted to new realities.

“Any time there’s a budget cut, it creates more pressure on remaining sources of funding to go further,” she said.

However, Moran said it has been difficult for organizations to estimate potential layoffs because they are unsure of how much funding they’ll receive in FY21.

“City Hall has not been fully transparent with us about the total amount of this budget cut. They’ve told providers about the status of the FY20 funding but not FY21,” she said. “At this point, we’re almost four months into the fiscal year and have little to no guidance on how to budget or plan for the future. It makes it difficult.”

To Moran, employees of human services organizations should be considered essential workers. “Many of them have been going to work during the pandemic in person, or they transitioned to remote work quickly so there was no lapse in services for people,” she said.

She said that UNH is planning a series of virtual rallies and other advocacy actions in the coming weeks, in anticipation of de Blasio releasing his FY21 financial plan in November.

“We hope that’s when they correct this wrong and put more funding into the indirect cost rate initiative,” she said. “We need to push back against this.” 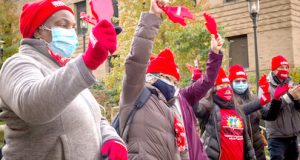