He drove to pick up a passenger on a Soundview corner – and was pierced in the chest with a bullet.

It was the late 60’s, and being a livery cab driver was risky business.

“It was very dangerous in those times,” recalled Marcos de la Cruz, who immigrated from Peru. He explained that the shooter, a young man, was after another driver with whom he had had an ongoing dispute, but shot de la Cruz nonetheless.

De la Cruz survived the assault – and has persevered in an industry he has committed to.

He now heads a fleet of livery cars, and hosts a daily radio show in which he responds to others drivers’ questions and concerns, particularly in reference to the industry’s rules and regulations.

On Thurs., May 21st, de la Cruz joined elected officials, community members, livery base owners, and drivers to announce a significant change in Taxi and Limousine Commission (TLC) regulations that would exempt drivers from having to pay “double tickets” for infractions.

It is a common arrangement within the car service industry for vehicle owners to both drive their cars as cabdrivers and then lease the same car to a fellow driver for a different shift.

Under current TLC regulations, should a driver commit a traffic infraction, such as running a red light, both the owner of the vehicle and the driver receive fines. In addition, drivers accumulate points with every infraction, which can lead to the revocation of their licenses, and the subsequent loss of income.

The “double ticket” has long been a contentious issue for the livery cab industry, whose work is based primarily in Northern Manhattan and the outer boroughs. For years, its members have charged that they have been subjected to exorbitant ticketing and harsh fines by the TLC. Moreover, drivers insist that TLC authorities are less likely to grant a fair hearing and dismiss fines.

“At the precinct, you can always dispute tickets and even have them dismissed in court,” argued de la Cruz. “With TLC, tickets are over $100 and drivers always end up losing.”

Industry leaders, including the Livery Base Owners Association (LBO), have sought to address the concerns with new leadership within the de Blasio administration, including TLC Commissioner Meera Joshi.

Senator Espaillat said that the previous regulations, which penalizes twice for the same infraction, was at odds with the American justice system.

“Double-ticketing goes against the fundamental concept of this nation,” said the Senator. He added that an average 45 licenses were revoked monthly based on the accumulation of points.

“The rules promulgated by the TLC make no sense,” added Assemblymember Luis Sepulveda. “We want to make sure that these rules don’t become a piggy bank for the city.”

The elected officials, industry leaders and advocates have engaged in roundtable discussions for months with members of the TLC and de Blasio administration.

On Thursday, they gathered to announce that there was change ahead.

Under new TLC regulations, tickets issued for running a red light will now be sent to the car’s owner, and he or she has 30 days to send proof of payment to the TLC. The ticket – and the charge – will not be duplicated.

“This is a historic day,” said LBO representative Cira Angeles, who owns Riverside Car and Limo Service. “We gather here together because we have one thing in mind, and that is to preserve our professional, for-hire transportation industry in New York City.”

Like de la Cruz, Assemblymember José Rivera is a veteran within the industry. As a young activist and political leader, Rivera organized livery drivers in the 1970’s, advocating for their rights as workers.

He said he had found the new TLC administration receptive, and specifically lauded the efforts of Commissioner Joshi, who he said had been open in discussions about revising and reforming current practices.

“For the first time in 46 years, we have a voice and representation for our livery drivers,” said Rivera. “I am willing to work with this commissioner.”

“We have been working together trying to alleviate some of the issues,” noted Jeffrey Roth, TLC’s Deputy Commissioner of Policy and External Affairs.

Assemblymember Marcos Crespo, who also serves as Chair of the Puerto Rican/Latino Task Force, remarked that a united front was crucial in securing further reform.

“We have set our differences aside and sat at the table,” said Crespo.

State Senator Ruben Díaz Sr. decried what he said had been years of neglect and abuse endured by livery cab drivers, and echoed the need to persist as a cohesive coalition.

Advocates insisted that this was but the beginning in the process towards reform and pledged to continue fighting.

“This is an important step to a broader discussion,” said Espaillat.

We have to make sure the dialogue continues to happen,” echoed Pichardo. “We will continue working.” 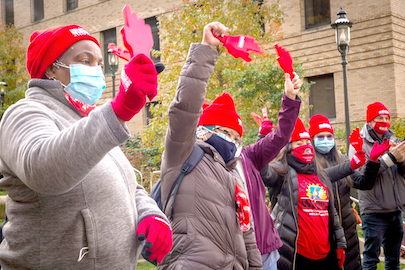