The faces of the hopeful were omnipresent in Northern Manhattan this week.

The protagonists seeking primary votes this past Thurs., Sept. 13th appeared on billboards, posters, palm cards and on the sides of moving campaign trucks, which routinely blared campaign jingles to merengue, salsa and bachata melodies.

The music served as soundtrack to yet another chapter in what has been an electoral saga dating back over two decades in which the names Espaillat and Linares appear; though in this instance, it was a family affair.

His daughter Mayra Linares, former Special Assistant to Governor Andrew Cuomo, faced off for the 72nd Assembly District against Gabriela Rosa, constituent liaison in the office of Assemblymember Denny Farrell. And while there were two other candidates, Ruben Dario Vargas and Melanie Hidalgo, it was Rosa, supported by Sen. Espaillat, and Linares, who presented a father-daughter ticket, who drew the most attention.

The two men have a long electoral history in Northern Manhattan.

And this summer, as State Senator Espaillat challenged Congressman Charles Rangel in an effort to become the first representative of Dominican ethnicity in Washington, D.C., Linares chose to support Congressman Rangel – a decision that was the subject of a negative mailer sent out by the Espaillat campaign that accused Linares of “betraying” Latinos.

Still, voter turn-out, as is typical for primary elections, was expected to be low, compounded by the change in day from Tuesday to Thursday in deference to the September 11th remembrances.

That would not deter the campaigns.

Espaillat passed out flyers outside P.S. 189, prompting excitement from schoolchildren, some of whom claimed he was “famous.”

“I expect a big victory,” he said

“I already voted for you—don’t disappoint me!” exclaimed one woman in passing.

But there was no such support from Eddie Tolentino, who was picking up his grandchildren. Tolentino said he had already voted for Linares: “I think he’ll handle the community better.”

The corner of 189th and Audubon embodied the energetic rivalry between rival campaigners.

“We’re getting along. This is what democracy looks like,” said Rodriguez. “Whoever wins, it’s good for the community that they see involvement.”

Despite the discarded flyers that carpeted the edges of the sidewalk, both insisted that their work served an important purpose.

“This helps them remember. The flyers also help people know what their options are and recognize who they’re voting for,” said Rodriguez.

For Rudy Gutierrez, an undecided voter, the reading material was useful.

“I’m going to read about the candidates now and then make up my mind on my way to vote,” he said.

In the long shadow cast by allegations of voter irregularities in the recent Congressional primary, the campaigns – and voters – were on alert.

Gutierrez himself was on his way to a different polling location after learning he was not on the books at PS 189.

“I was very surprised when they told me I wasn’t voting here,” said Gutierrez, who voted at PS 189 in June.

Siegfried Holzer, a poll coordinator at 76 Bennett Avenue estimated that 12 percent of eligible voters stopped by that day. “[Still], it’s better than a lot of electoral districts around here,” he said.

A number of voters who showed up at 76 Bennett Avenue were redirected to PS 132, and for the first time, voters on Fort Washington had to go to Bennett Avenue, which proved problematic due to the area’s topography.

“There’s a natural barrier, a sheer cliff between Fort Washington and Bennett Avenues.

It’s really hard for older people and people in wheelchairs to get down here,” said Holzer, citing the 175-step descent on 187th Street that connects Fort Washington and Bennett Avenue.

It was reported that a full pad of referrals had been used for voters who were redirected to PS 132.

“Between 25-30 people said they weren’t even going to bother voting,” said Russell Murphy, spokesperson for New York City Councilmember Ydanis Rodriguez, who was watching the polls.

Those that were successful in voting expressed a wide range of concerns.

“I voted for Linares.

Espaillat, from my experience living here, is interested in just moving on to the next office, whatever it happens to be. It’s unclear whether he’s accomplished anything in Albany,” said a voter at 76 Bennett Avenue, who wished to remain anonymous.

Daniel Gradess had environmental concerns that led him to vote for Espaillat.

“He has been a vocal opponent of fracking and a voice for basic common sense in protecting our water and our land and I really appreciate that,” said Gradess, citing Espaillat’s trip to Pennyslvania to witness the effects of hydraulic fracturing. “There are few issues that stand to really shape our state as much as that one in coming decades and this coming year.”

To add to an already rich drama, both candidates planned their victory parties on Dyckman.

At approximately 10 p.m., a smattering of the Linares family supporters had installed themselves at 809 Restaurant and Lounge; across the street, Espaillat campaign supporters packed themselves into Dyckman Express.

“It’s going to be a close fight, [but] we’re hoping to pull it off.

We’re expecting a lot of people,” said Elvin Marte, president of Riverside Radio Dispatcher as he sat patiently at 809. “We encouraged our drivers to vote for Linares because I think he could do more for our community.”

Marte was joined by New York City Councilmember Robert Jackson, who endorsed Linares while Espaillat was running for Congress.

“When I gave my commitment, I stayed with him through thick and thin. Now we’re at the end of the race, and I’m still with him,” said Jackson.

“Linares has been true to the whole community and doesn’t fragmentize it,” said Laufer.

Moisés Pérez, founder and former executive director of Alianza Dominicana, who helped run Rangel’s campaign against Espaillat, said he supported Linares for his effort to pass a bill that would create 1,500 more tax medallions and allow livery cabs to pick up hails.

He said he didn’t mind waiting for the results to come it.

“The Board of Elections doesn’t want to make a mistake. I suspect they’re being extra careful this time around as well they should be,” said Perez. “I’d rather wait a little while longer and get the most accurate results rather than go through the drama of the last election.”

As the night wore on, across the street, Espaillat supporters took as fact the incumbent’s victory – and were jubilant as official results came in.

By 1 a.m., Espaillat and Rosa were declared victorious – Espaillat 2 to 1 over Linares, and Rosa with 44 % of the vote.

“This is amazing,” said Gabriela Rosa. “It is an honor for me to be making history. I am now the first Dominican-born woman elected to the Assembly.”

She spoke of the importance of a united agenda, fighting for jobs, affordable housing and education.

“We have one agenda, and that is the community’s agenda,” she said.

She thanked the volunteers and other elected officials for their support, but reserved her greatest gratitude for her mother, who had traveled from Santo Domingo.

There were many others showing the Espaillat-Rosa ticket support.

“The candidate who represented both Washington Heights and the Upper West Side won the race. He’s fought the good fight and he’s never been afraid to take on power. He deserved to win,” said Manhattan Borough President Scott Stringer in an audience that included former City Comptroller William C. Thompson, Public Advocate Bill De Blasio and City Comptroller John Liu. “A lot of tenants came up to me today and said ‘I’m glad you’re for Espaillat’ because he’s the one who fights for tenants.”

“The whole community, for the West Side to Inwood, came together as a political block that is working together with the rest of New York to push a progressive agenda, to fight for affordable housing, for quality education, to give our community a voice,” added an elated Councilmember Ydanis Rodriguez.

Levine had considered running against Linares, but will instead be running for City Council, hoping to succeed Jackson.

“This is a feeling of exhilaration,” said Levine. “We won because of the coalition we built, that was diverse in a way you just don’t see in New York City politics.”

As the early morning gave way to 2 a.m., both sides of Dyckman fell quiet, as Espaillat revelers took their festivities to Guadalupe’s on 207th Street, and the Linares supporters left 809.

All along the streets, the candidates’ smiling faces still lined the way, hoping indefinitely for one more vote. 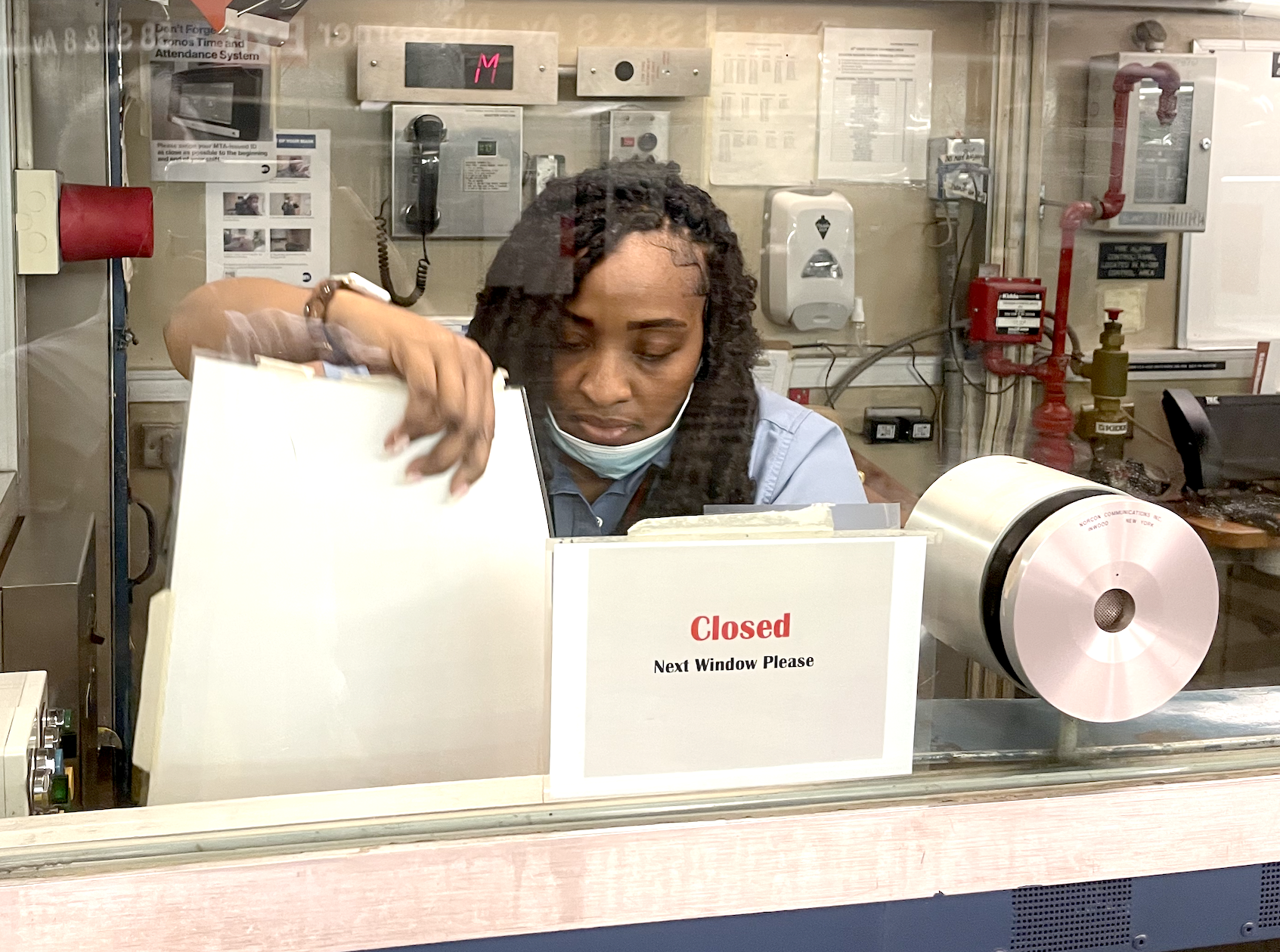