“Dunk(ing) the Junk” and focusing on health

Story and photos by Marisol Rodríguez

At the third annual “Dunk the Junk” Nutrition Fair held on Sat., May 19th, the objective was simple, but not always easy: “identify one bad nutritional habit and dunk it, or get rid of it,” said Devin Shelley, Corporate Service Manager for New York-Presbyterian Hospital.

Shelley spoke to these concerns on the campus of El Faro Beacon Middle School in East Harlem, where the nutrition fair was held.

Kids like Deshaun Harrison were giving literal meaning to this idea by shooting hoops with a basketball disguised as a cheeseburger.

While Harrison played on the courts at “Dunk the Junk,” sponsored by New York-Presbyterian Hospital in collaboration with Community Board 11 and El Faro, the 11-year-old said he mostly eats fruits and vegetables, with an occasional candy here and there.

Basketball provides Harrison with a good source of exercise as well. “The running [in basketball] increases stamina and gives you power,” he said.

“Dunk the Junk,” which is specifically targeted at the Harlem community, offered an afternoon of free-screenings for diabetes, asthma and hypertension, among other serious ailments common amongst community residents.

Local chefs and grocers provided cooking demos on how to make simple, healthy meals while representatives from affordable health-care organizations such as Health First and Health Plus assisted attendees in applying for health coverage.

Dr. Maura Frank, head of Pediatrics at New York-Presbyterian, and one of the doctors providing free health screenings, got the opportunity speak in-depth with the parents of her patients about their own risk-factors for conditions like high cholesterol, which is closely linked to being over-weight.

Even those who inherit bad cholesterol genetically can improve it through healthy eating habits, said Frank.

“Everyone that I’ve spoken to, luckily, wants to improve,” she said.

Around 10 years ago, Frank and her colleagues noticed a significant increase of obesity in children, which motivated them to start the “Health for Life” program for obese children at new York-Presbyterian.

Not only do these children enter a pre-diabetic state in becoming obese, said Frank, but they also experience daily affects of obesity, such as Sleep Apnea caused by fat obstructing the air passage when these children lie down to sleep.

Consequently, they do not get a good night’s rest, which can affect their performance in school, added Frank.

High-calorie, sugary drinks like juices and sodas, noted Frank, are also a major source of children and adults putting on the extra pounds.

“The use of sugary beverages is one of the biggest culprits,” said Frank. “Many parents find in very difficult to decrease their intake of these beverages,” she said.

Although individuals ultimately make decisions on what or what not to eat, Dr. Frank agreed that doctors do have a responsibility to advocate for healthy eating habits for their patients, including making sure health foods are available at supermarkets, bodegas and in school cafeterias.

“Places that promote health, like schools have a responsibility to serve what’s healthy,” she said.

Frank added another tactic to increase healthy eaters could be mimicked of one used to deter smokers: the high taxes on cigarettes.

Endocrinologist at New York-Presbyterian Hospital Dr. Jason Baker, who was also working at the nutrition fair, has done research around diabetes and said the disease affects over 300 million people world-wide.

Baker was quick to highlight the opportunity for reversal of diabetes through losing weight.

Patients who are screened for diabetes should also be screened for depression, which can be a major factor in an individual’s decision to overeat, noted Baker.

With individual support systems, which can include therapy, “patients can empower themselves to make changes that will result in better life choices,” Baker said.

The high-rate of incidents of Type 2 diabetes among Latinos and Blacks has been connected to high carbohydrate foods in these communities’ cultural diets; however Baker said it was also a result of people from these communities having little access to fresh fruits and vegetables.

Catherine Sánchez of Baychester notices this healthy-food void in her own neighborhood.

Sánchez, who was at the fair with her 5-month-old son Phillip and mother Ella Felix, a volunteer with the American Diabetes Association, frequently eats out and said the options around where she lives are almost all fried.

“It’s either a cheeseburger or fried chicken,” she said.

After finding out she had high blood pressure at the fair, Sánchez plans to follow the doctors’ advice to lose weight through eating smaller portions and exercise.

“I want to be around for a long time for my son,” she said. 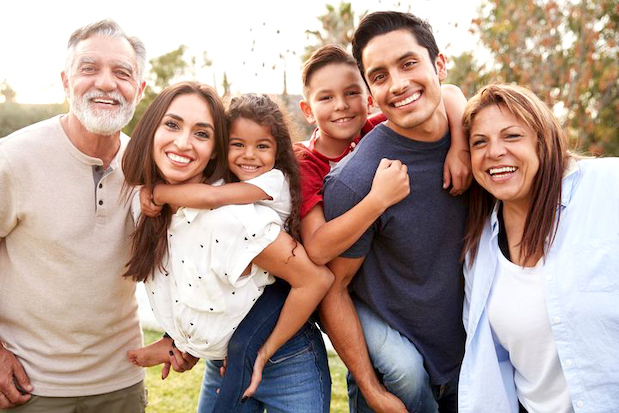 No Brakes on the Bikes
Sin freno