They don’t keep tabs on t-shirt sales at The Gap, do they?

Restaurant and bar owners voicing concern over a new law preventing establishments from serving non-tobacco hookah say the regulation is unfair and could force them out of business.

“I don’t think the city is telling The Gap that they need to sell more t-shirts than they do jeans,” said Jeffrey García, Vice President of the NY Latino Restaurant, Bar and Lounge Owners’ Association.

García was joined by dozens of members from the Association, which represents hundreds of establishments citywide, on the steps of City Hall on Mon., October 22.

The group is calling on the city to alter the regulation for hookah permits, which required businesses to generate 50 percent of their revenue from hookah in order to be eligible for the permit.

“To mandate a certain percentage of sales is really ridiculous,” said García.

Elvis Silverio, President of the Owners’ Association, said the majority of establishments can’t meet that criteria and might have to lay off workers or shut down if they can’t sell hookah.

“We’re going to be closing hundreds of establishments,” he said. “We can’t combat with the city crisis in rent, the minimum wage increase next year and also with this bill.”

The new law went into effect at midnight on Monday, meaning the city can begin issuing fines to businesses caught selling hookah without a permit.

“We’re going to stay above water and stay away from fines by not selling, but this will take a toll come payroll, or come rent day,” Silverio said. “This is not only about businesses, this is about families. People that are providing for their families and have to comply with this law. “

Enacted last year, the new law required businesses that wish to sell hookah to apply for permits between April 16 and October 22, 2018, to raise the minimum age for the purchase of hookah to 21 years old and to post warning signs provided by the New York City Health Department, describing the risks of hookah use.

The Health Department said it hosted an information session with the Latino Restaurant, Bar and Lounge Owners Association in October and had performed outreach with more than 400 establishments. According to the Department, even tobacco-less hookahs pose a risk for smokers and those who breathe in secondhand smoke.

“Even without tobacco, hookah smoke is dangerous,” said Health Department spokesperson Stephanie Buhle. “Hookah smoke contains chemicals that can increase the risk of heart and lung disease, cancer and early death, both for smokers and nonsmokers. One hour of smoking hookah can expose someone to as much carbon monoxide and tar as smoking 10 cigarettes.”

However, owners said the popular water pipes were a big draw for customers and generated a large amount of income for their businesses.

Pedro Goico, a co-owner of Mamajuana Cafe in Inwood, said that 20 percent of his sales involve hookah, but pointed out that it generates about 40 percent of the cafe’s revenue.

“When they get hookahs, they buy drinks and also eat,” he said of restaurant patrons. “It’s a revenue generator for us to help us offset the high increases of the rent. Losing that would be huge.”

Goico also complained that the city would not give hookah permits to newer business opened after October 2017. “It’s a crazy bill; it’s very biased,” he remarked. “We’re saying to take that off.”

“This new legislation unfairly impacts us,” added García. “We understand that there are health concerns, all that, and we want to work with the city to make [the bill] better.”

Urbano Estévez, owner of Barcelona Bites in Riverdale, said that business owners would be willing to comply with other restrictions, such as only selling hookah on weekends, or after 10 p.m., in exchange for loosening some of the other rules, like the 50 percent of revenue requirement.

“Even if you’re only selling 10 percent hookah, there’s a big profit margin it’s generating for you,” Estévez said. “Hookah is a big draw. It helps lure people in to eat, hear music.”

As the permits are non-transferable, Estévez said it also crippled the value of a business, as a new owner cannot acquire the permit to sell hookah.

“There’s a lot about this law that is off-base,” he remarked.

Frank García, Chairman of the New York State Hispanic Coalition Hispanic Chambers of Commerce, said that 60 Latino-owned restaurants will close in the city during October, and the hookah law will make matters worse. “It’s not helping small businesses, it’s hurting,” he stated. “We need support.”

Goico suggested that many Councilmembers have expressed sympathy for the businesses in private but are reluctant to speak out privately.

“It’s tough because they don’t want to be seen as promoting something that has to do with smoking,” he said. “We have no tobacco in the hookah, it’s a job generator for the people here. Help us meet in the middle, and at the same time let people decide whether they want to smoke or not.”

The Show at the Shrine
Espectáculo en el Santuario

“A Call to Action”
“Un llamado a la acción” 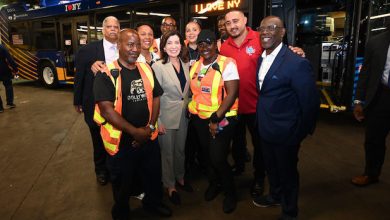