Lappin in running for Borough President

The campaigns are in full gear, as evidenced by the debates, the ads, and the literature. Voters are presented anew with the choice in this election season, in some instances, to elect new leadership, and in others, to choose between challengers and incumbents.

As we near Primary Day and Election Day, we will speak with the candidates about their vision for New York and its residents. Some faces will be new, others’ names might be a bit more familiar. “There is real power in this office,” says Councilmember and Manhattan Borough President candidate Jessica Lappin.

Join us in listening to their ideas, hearing their histories and taking a look at what drives them to run. Send us your thoughts and responses.

Get involved, get informed, entérate.

And above all, make your voice heard.

Jessica Lappin wants to make sure her roots show.

The Councilmember, who has represented Manhattan’s 5th Council District since 2005, is running to become President of her beloved Manhattan borough, where she was born and raised.

Her district as Councilmember included the Upper East Side and Roosevelt Island – which might seem light years from the streets of Northern Manhattan.

Not so, according to New York State Senator José M. Serrano, who represents East Harlem, and who endorsed her in March.

“We need leaders who will reform government to make it work for New Yorkers from every single community,” said Sen. Serrano in his statement of support. “Jessica has demonstrated that she is committed to progressive values, delivering for seniors and families by securing resources for Manhattan residents, protections for working people and enhancing transparency in government.” “I have demonstrated that I can…get things done,” says the mother of two.
Photo: www.jessicalappin.com

The same sentiments were echoed even earlier this year, in January, by El Nuevo Caribe Democratic Club president Raul Reyes, District Leaders Peggy Morales and Harry Rodríguez, who also touted Lappin, who has served as the Chair of the Committee on Aging, as a stalwart advocate for the elderly.

The issue is of particular importance in a city in which, over the next 20 years, the number of senior citizens is expected to grow by 50 percent.

“It’s why I wrote the law creating the city’s Silver Alert system, which broadcasts information about missing seniors who are vulnerable,” explained Lappin.

She also points up legislative work in the Council that regulated social adult daycare centers and protected Meals-on-Wheels programs for the elderly.

Her work in public service, explains Lappin, was inspired by the late Senator Daniel Patrick Moynihan, with whom she worked while attending Georgetown University in the nation’s capital.

“Public service seemed so meaningful,” she recalled. “It was clear to me that it was possible to have real impact.”

And despite her profound appreciation for the Senator and her work, she always knew her own path was to be hewn back home, in New York.

And in her legislative career, Lappin has chosen to champion causes that resonant, at once, with personal and political significance.

To that end, she led the Council to pass landmark legislation that helped regulate crisis pregnancy centers that were essentially fronts for anti-abortion groups.

“These women are scared and confused,” she explained of pregnant patients seeking information and counseling at places they were misled into believing were real medical clinics.

“These fake centers are often in the same building as Planned Parenthood, and so it’s even easier to lead women to think they’re at a real clinic,” she said, her voice rising. “It’s unconscionable. Women deserve honest medical advice.”

The deception is easily compounded in neighborhoods with high immigrant populations, she said, when there is a language barrier or limited access to consistent and quality healthcare.

Her choices have sometimes presented instances of clear opposition to the positions of those with whom she served in the City Council.

But no name-calling was needed.

“You need to build relationships,” she insists. “We work as a legislative body. When you disagree, you can do so in a civil way. We all have different experiences – and there’s always another battle ahead.” Her role as an advocate, and her desire to amplify her commonsense and progressive vision for New York is precisely why she says she has opted into the borough presidency’s race.

“There is real power in this office, to effect change and to positively impact the lives of Manhattan residents.”

Among the duties assigned, the Borough President must review all land use and zoning projects and offer recommendations to the Mayor on whether a project should be given the green light. The Borough President also receives a portion of the city budget to allocate, and can appoint members to some city agencies.

“Scott Stringer has done an excellent job, especially on land use issues and on policy,” she said. “He has been very thoughtful and deliberative.”

The mother of two young sons says she is relishing the opportunity to leverage the visibility of the office to bring greater awareness on key issues she has a proven record on, not the least of which is ensuring that all city students have access to a great education.

“I have demonstrated that I can lobby and organize to get things done,” she said, noting that while in the Council, she oversaw the opening of five new school buildings in Manhattan, and the addition of over 20,000 new public school seats throughout the city. If elected Borough President, she would look to engage Education Fellows, graduate student who would work directly with local Community Education Councils (CEC’s) and Parent Teacher Associations (PTA’s) to help them better access resources, write grants and lobby officials.

And as a public school parent, she says she has experienced first-hand some of the frustrations commonly voiced across the city.

“We feel we do not have a voice [as parents],” she remarked. “And this has to change.”

Her own mother was a single mom, and while Lappin counts on the support of her husband, and makes having dinner daily together with her family a priority, hers is, admittedly, the wondrous, difficult life of a working mother who seeks to strike a balance.

“I’ve had to make sacrifices. And there are no clear-cut answers as to what is always best,” she says of juggling the demands of the life as a public servant and a wife and mother. “But you create your own boundaries and priorities.”

And she often brings her worlds together, as when her sons participate in rallies calling for changes to stop and frisk or urging action on the Dream Act.

“I think it’s important for [my sons] to see the work I do, and to be civically engaged. I want them to experience this city as their own, and as ours, together.”

“And yes,” she adds with a laugh, “sometimes there may be doughnuts involved.” 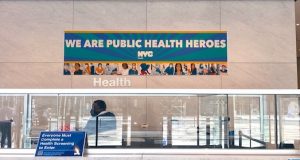