When Laura Williams saw a photograph of her aunt at the Harlem Is…Activism exhibit, she glowed with pride.

The exhibit, which opened this past week at the Interchurch Center this past Thurs., Sept. 27th, features the stories and photos of 30 legendary Harlem activists.

Williams’ aunt, Ruth Williams, established a dance studio in Harlem in 1948, teaching tap, ballet, jazz, African and hip hop to generations of young people. She taught more than just dance – she boosted their self-esteem and respect for themselves and each other.

Her niece, now the artistic director of the Ruth Williams Dance Foundation, called the exhibit, “an honor and a blessing.”

“My aunt was a mentor to me. She brought us up in dance,” she said. “When I see things like this, I bring my children here so they can remember her.”

The exhibit also features a photographic timeline of Harlem history, running from 1900 to present day.

Much of the research for the exhibit was done by hundreds of children in schools all over the city involved in Community Works NYC (CWNYC) programs.

Barbara Horowitz, president of Community Works, said, “This is really what our work is about.”

It is important for young people to have a first-hand experience, she said. When they talk directly to people who’ve “walked the walk,” it makes history real to them.

“It’s been very, very powerful. And as time goes by, these young people grow up, they are inspired by this work,” she observed.

Horowitz added that another benefit of having children interview elder statesmen, artists, actors and activists is that the young would-be journalists get good responses.

“The person being interviewed is so charmed by the young person [that] they become very natural and feel like they really want to communicate,” she said.

CWNYC has also created exhibits on Latin communities and other historic expositions, including one on the Japanese internment during World War II and another on the Civil Rights movement, called The Long Walk to Freedom.

The educational non-profit was the driving force behind the exhibit, a collaborative efforts with several other organizations.

“They say it takes a village to raise a child,” Horowitz said during the reception. “Simply put, our new child is Community Matters NYC, and it has taken the combined efforts of so many people.”

She thanked several partner organizations in Harlem, East Harlem and Washington Heights. The 20-year old organization has formed partnerships with The Interchurch Center, the New Heritage Theatre, The Schomburg Center and City College of New York and Columbia University School of the Arts, as well as many other organizations and individuals.

“So many…are in this room and too many to even begin to name,” Horowitz said. “It’s through the combined efforts of everyone that I’m standing here today.”

“It’s a very moving moment,” said Mark Harding, the interim director of the Malcom X and Dr. Betty Shabazz Center Memorial and Education Center. The Shabazz Center was one of the anchor organizations involved with the project. He said the exhibit represented a very proud moment for everyone.

In October and November, The Shabazz Center is hosting a slate programs produced by Community Matters. The Latin Roots: Washington Heights and Inwood features exhibitions, musical events and walking tours.

“We’re involved with Community Matters because it elevates our profile as an institution, but it also elevates the platform for the programming for the whole of Upper Manhattan,” Harding said.

“This is how we build capacity in our community, in both Washington Heights and Harlem,” he added.

Washington Heights artist Dingda McCannon is also involved in another slate of Harlem-focused events created by the organization.

McCannon is leading a group of artists working on Harlem Memorabilia quilts. “It’s about 20 women who are doing phenomenal things in mixed media and quilting arts,” she said.

This is just the beginning, Horowitz said.

“We continue to document not just Harlem, but things across the city in oral history type projects. That’s what our work is about.”

She also has plans to turn the exhibition materials into a book. “It needs to be something you can hold in your hand, so yes, we are going to look at how to make that the next reality.”

To hear from Barbara Horowitz and others involved in the Harlem Is…Activism exhibit, please visit: http://bit.ly/MT_75.

TheHarlem Is…Activism exhibit is on display at Interchurch Center on Riverside Drive and 120th Street until Nov. 23rd. More information can be found at: communityworksnyc.org.

“On the verge of falling”: drawing as a meditative dare
"A punto de caer": el dibujo como un reto contemplativo 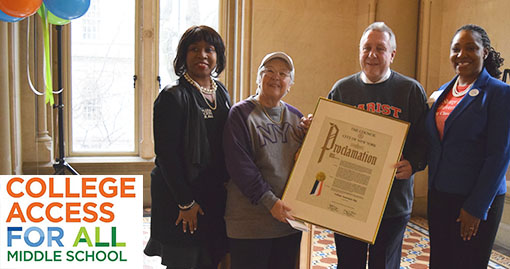