A star is honed

To break through, Víctor Estrella Burgos (Estrella) and his team wouldn’t have to focus not on iTunes, but on tuning up.

His physical trainer Matias Rizzo recalled how, in 2013, he met the Dominican professional tennis player in Ecuador as the latter recovered from sports injuries. Estrella hired Rizzo explicitly to crack his way into the elite rankings of the Association of Tennis Professionals (ATP).

Their partnership paid off.

In February 2014, roughly eight months after he began training with Rizzo, and at an age when many players think of retirement, Estrella broke into the top 100 of the ATP.

He is the first Dominican player to do so.

This past Fri., Aug. 28th, Estrella, who is currently ranked #50 in the world, took a break from his training for the U.S. Open to meet and visit the students of the Washington Heights Tennis Association (WHTA) at the tennis courts of Inwood Hill Park. Estrella has been affiliated with the group from its founding.

“I am happy to be here today. Inwood Hill Park is very special to me,” said Estrella. “I used to come in the summer to train and help out. It is a great honor to come back to give a clinic.”

Founded in 1997 by Eligio “Leo” Reynoso, WHTA’s mission is to provide free year-round tennis lessons for children aged 5 years and older. The program is open to all.

Estrella first met Reynoso in 1994 at the National Games in the Dominican Republic. They established a strong friendship based on their shared love of the sport and their mutual desire to make it more accessible to those from low-income communities.

“Tennis for all, all year round, is what makes us successful,” said Reynoso. “We have helped thousands of young players. We have done very much with very little.”

At Friday’s clinic, Estrella lobbed and served tennis balls to the children who took turns aiming to strike across the net.

He also signed autographs and posed for pictures.

His visit served as occasion to sing a few choruses of “Happy Birthday” and cut into a classic Dominican bizcocho.

Reynoso lauded Estrella for remaining humble and remembering his roots. His success story, he said, demonstrated that tennis should not be considered a pastime merely for the privileged.

“We can reinforce the idea among the youth that ‘Sí, se puede’,” beamed Reynoso.

“[This sport] belongs to everybody,” echoed State Senator Adriano Espaillat.

“Keep on practicing. Work hard and keep motivated,” he said.  “If I could do it, you can do it too.”

After his Inwood visit, Estrella was due back at Flushing Meadows to resume his preparation for the fourth Grand Slam. Afterwards, he will travel to Dominican Republic, where he will join the Dominican national team to play the Davis Cup playoffs against Germany.

It has been a whirlwind period.

Though he lost in the third round to Milos Raonic of Canada, Estrella appeared at the U.S. Open for the first time last year. At 34, he was the oldest player to make the tournament’s debut.

His constant companion, Rizzo the trainer, watched as Estrella made his last rounds on the courts.

“We are taking it one day at the time,” said Rizzo. “Match by match.” 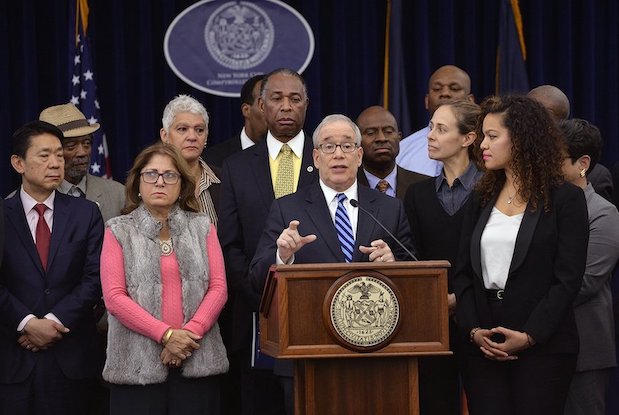